Contemporary accounts of senjafuda mention exchange meetings happening by the end of the 18th century. In other words, by the 1790s people who were making slips to paste up at religious institutions were also getting together with like-minded people at tea shops or restaurants to trade those slips with each other. By the 1830s, this led to the formation of organized clubs—called ren 連—of senjafuda aficionados. These groups would not only exchange slips with each other, they would hold large meetings at which they would exchange slips with other groups.

Slips meant for pasting continued to be mostly simple monochrome objects, but as collecting and trading slips became the focus of most aficionados' attention, specially designed “exchange slips” (kōkanfuda 交換札) developed. Exchange slips were meant to be appreciated up close rather than glimpsed from afar, and so more attention was paid to their design elements and workmanship.

This led to the elaborate, full-color slips that are the focus of this digital exhibit. Senjafuda aficionados began to enlist the services of professional artists and craftsmen to design and print their exchange slips. Many of these professionals in turn came to participate in the senjafuda world themselves. The higher artistic quality of the slips in turn attracted more participants. The formation of ren allowed for better organization of the design and financing of slips, as well as better coordination of large-scale designs or series of designs.

Part of the playfulness of senjafuda exchange and collecting came simply from the chance to appreciate beautiful, well-made objects. But of course, just as with pasting slips, an element of competition could be present, as individuals or groups strove to outdo one another in the beauty or cleverness of their slips. Cleverness in particular came to be prized in senjafuda design, just as it was in other areas of early modern popular culture. 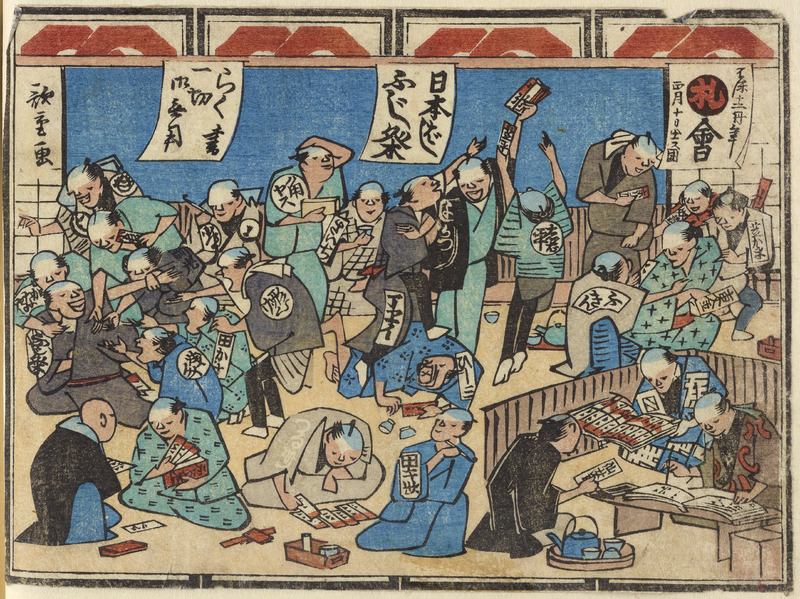 On this page are two depictions of senjafuda exchange meetings. The one above depicts a meeting taking place on April 10, 1842. The illustration is by Utagawa Hiroshige 歌川広重 (1797-1858), one of the most famous and influential of woodblock print artists. The scene would have been held at a restaurant (restaurants often had large rooms on upper floors that could be rented out for parties), and teacups and teapots can be seen here and there on the floor; the blue background at top shows that sliding doors have been opened to the outside. Hanging from the lintel are handwritten banners; one identifies the ren attending the gathering, and the other says (ironically) “graffiti strictly forbidden.” Some participants are quietly exchanging slips, while others are clamoring energetically to claim ones they particularly want; a group of men in the bottom right corner are peacefully perusing slips that have been pasted into scrapbooks. This slip captures a noisy, fun atmosphere that goes a long way toward explaining the popularity of this activity. 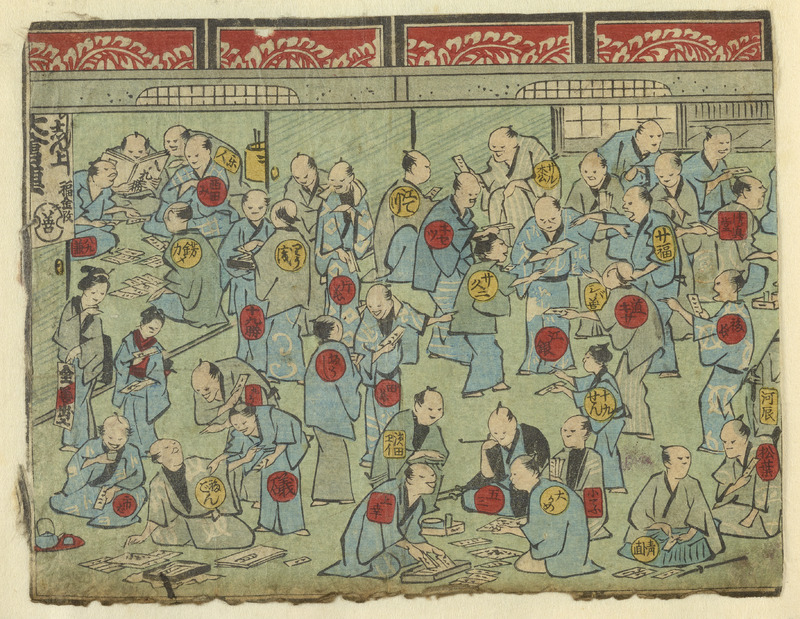 The second depiction of an exchange meeting (above) is actually the left four chō of an eight-chō print (the full piece is reproduced in Sekioka 1983).[1] The print depicts an exchange meeting that took place on October 15, 1861; the illustration is by Utagawa Hiroshige II (1826-69), pupil of the first Hiroshige. As on the earlier print, the artist has added circles labeling many of the participants. Note that women are depicted as being among the participants.