Some of the best-known yōkai are ordinary animals that are believed to secretly have supernatural powers. Foxes and tanuki are the best-known examples of this type of yōkai, but cats are also known to shade over into monster territory. The yōkai sugoroku board discussed elsewhere on this site contains not one but five monster cats.

The cat yōkai in the second row from the bottom is a nekomata 猫又 or fork-tailed cat. By the same principle that animates tsukumogami, cats of advanced age were thought to develop forked tails and magical powers. One sign of this, evidently, was dancing madly on two legs—this is how the nekomata is depicted in Toriyama Sekien’s Gazu hyakki yagyō, and as we can see in the sugoroku depiction, the dancing cat (here with a rag on its head) is an eery fixture of yōkai iconology. Two more nekomata can be seen in the finish square at the top of the board; they, too, are dancing (and it’s a nice touch that their rags match those in the square below).

The ones in the finish square are attending on a bakeneko 化け猫 or "monster cat." While the distinction between bakeneko and nekomata is seldom clear, bakeneko are often imagined as including shape-shifting as one of their powers. The scene in the finish square comes from an 1827 play by the author of Yotsuya kaidan, Hitoritabi Tōkaidō gojūsantsugi (Traveling alone on the East Sea Road, All 53 Stages). In the scene in question (adapted from legends surrounding the post-town of Okazaki), a traveler stops for the night at an old temple, where he encounters an old woman who turns out to be a shape-shifting cat. After they fight, she flies away. Ukiyo-e depictions of the bakeneko scene in this play (and its frequent interpolations into later plays) made the tableau one of the most recognizable in kabuki, and have colored the imagination of yōkai cats ever since.

Below is another image associated with this play (also found at the top of this page). This slip is from a series called “Shadows of the Stage,” depicting famous moments from kabuki plays in silhouette—an elegant, sophisticated variation on the more playful silhouette prints discussed on the night parade page. It shows the bakeneko in the same half-transformed (humanoid but with cat features and fur) state as in the theater prints, showing just how recognizable the scene is. Compare this to a theater print by Utagawa Kuniyoshi 歌川国芳 (1798-1861) from an 1835 version of the scene; the original is a triptych, of which only the leftmost panel is in the collection of the Jordan Schnitzer Museum of Art. The complete triptych may be viewed here.

The final yōkai cat image is one designed by Kuniyoshi himself. It shows the hero Inumura Daikaku Masanori slaying a monster cat. It’s a scene from Eight Dogs (Hakkenden 八犬伝, full title Nansō Satomi hakkenden 南総里見八犬伝), an adventure novel by Kyokutei Bakin 曲亭馬琴 (1767-1848) that was serialized between 1814 and 1842 and was one of the most popular and influential works of fiction of the 19th century.

In the episode depicted in this scene, Daikaku has just learned that the man he thought was his father is actually a wicked shape-shifting catamount (yamaneko 山猫) that killed Daikaku’s father many years ago and took his place. The catamount devoured Daikaku’s mother and then fathered an equally wicked half-catamount son by the first woman he could find wicked enough to withstand his baleful influence. Daikaku, a dutiful son with high moral principles, can’t understand why his father and half-brother are so cruel, but he endures their treatment until he receives a message from the ghost of his real father explaining the situation and charging Daikaku with avenging him.[1] In the novel, the catamount is still in human form when he’s slain, and only reveals his monstrous true form in his death throes; in the senjafuda, Kuniyoshi shows Daikaku stabbing the catamount in its feline form (note the forked tail flicking up behind Daikaku).

What readers of the novel would have known is that this slip is actually showing two yōkai—or, at least, two creatures born of magic. One is the catamount. The other is Daikaku himself. He is one of the Eight Dog Warriors referred to in the book’s title, eight men born into eight different families who one by one learn that they’re the spiritual descendants of Fusehime, daughter of the Satomi samurai clan, and Yatsufusa, her beloved dog. Fusehime’s union with Yatsufusa was not a physical one, but a spiritual one facilitated by her faith in the Lotus Sutra, and each of the Dog Warriors is either born with or comes to possess a bead from a set of prayer-beads that Fusehime had owned. Each of these beads bears the character for one of the cardinal virtues (Daikaku’s is rei 礼 or “propriety”); the beads also display magical powers from time to time. The Dog Warriors themselves don’t have magical powers, or any outward canine qualities, but they’re conscious of being descended equally from a girl and her dog, by a mystic process nobody really understands.

The Dog Warriors, then, aren't precisely yōkai, and since many of the enemies they face in the course of this very long novel are supernatural, it's possible to see them as part of the lineage of heroes who conquer yōkai, like those assembled in the Heroes Clowning Around on a Tour of Hell print. But their dog heritage embeds a bit of yōkai in them, especially because their spiritual father Yatsufusa was nursed by a tanuki as a puppy—a tanuki inhabited by the angry ghost of one of Fusehime's father's enemies. The Dog Warriors, in other words, can also be thought of as a very Edo-period merging of hero tropes and the yōkai imagination. 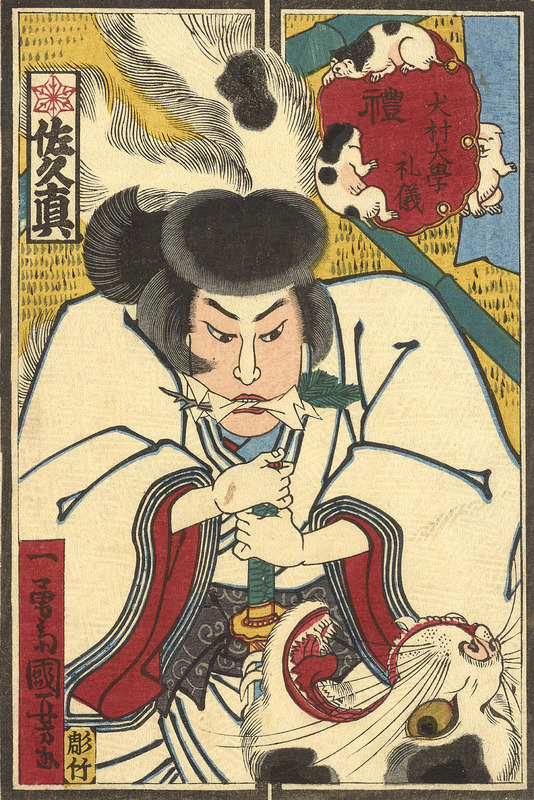 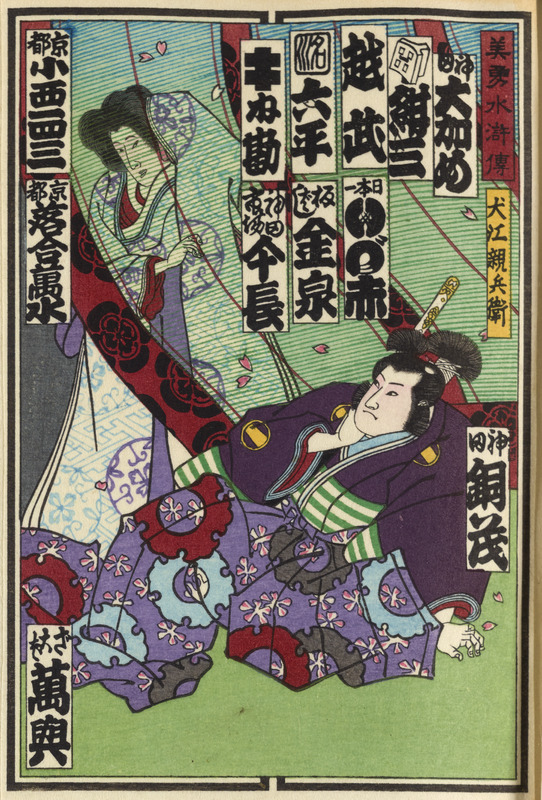 The second slip above is also related to Eight Dogs, so we'll discuss it here although it doesn’t show a cat. Given the popularity of this story in the 19th century, it’s no surprise that the UO senjafuda collection contains several series that deal with it in whole or in part. This slip comes from a series called “Beautiful Braves on the Water Margin,” which brings together various handsome young heroes in dramatic scenes. The title, of course, refers to the Chinese novel discussed elsewhere on this site in connection with tattoos, and the senjafuda series is an adaptation to this format of an ukiyo-e series of the same name designed by Tsukioka Yoshitoshi 月岡芳年 (1839-1892). The ukiyo-e version of this scene can be seen here.

This slip depicts another of the Eight Dog Warriors: Inue Shinbei, whose cardinal virtue is jin 仁 or benevolence. At first glance the scene simply depicts Shinbei and a beautiful young woman exchanging a look through a blind, but to someone familiar with the story the image is shot through with magic and menace. Shinbei appears in the story relatively late, and but his chief nemesis is a being introduced very early: the tanuki that nursed the dog Yatsufusa. As noted above, this tanuki had been possessed by the angry spirit of a dead enemy of the Satomi family. This spirit’s plan to bring down the family via the family dog fails, but the possessed tanuki lives on and reappears in the story as the sorceress Myōchin, who masterminds an insurrection that nearly brings down the Satomi. Shinbei saves the day, and in the process reveals Myōchin to have been a tanuki all along. This scene depicts an imaginary confrontation between the baby-faced Shinbei (who is only nine, although he's as big as a full-grown warrior) and Myōchin in human form—her wild hair and fierce expression hint at her malevolence.