Symbolically, at least, an ema represents a gift of something of value to a shrine or temple: a horse, or a valuable picture, or simply the money given in exchange for the plaque. Senjafuda, in their earliest form, were meant to represent something else: the devotee himself or herself. Early accounts of the practice extol the virtues of the daimei, which originally meant not the pseudonym itself but rather the practice of writing one’s name and address on a piece of paper and leaving it at a shrine or temple. This was believed to function as a proxy for the worshipper, allowing the worshipper to physically leave the premises while the proxy (the slip) continued to hold a vigil at the place of worship. Of course, leaving one’s name-slip pasted to the wall of a building also let others know that one had made the pilgrimage, effectively boasting that, e.g., “Kōhei was here.”

Early senjafuda pasting was considered a nuisance by religious institutions, akin to graffiti—and, indeed, some practitioners would simply write their daimei directly on the wall of a temple or shrine building. Temples and shrines discouraged the practice and city authorities tried to ban it, but seemingly with little success, for senjafuda culture was thriving by the end of the 18th century. In fact, the prohibitions only seemed to increase enthusiasm for the practice, as senjafuda pilgrims began to compete to place slips in forbidden places, or in spots where priests would be unlikely to notice them or unable to take them down. Senjafuda aficionados even developed specialized tools (long poles with brushes attached to the end) to help them paste slips in hard-to-reach places. 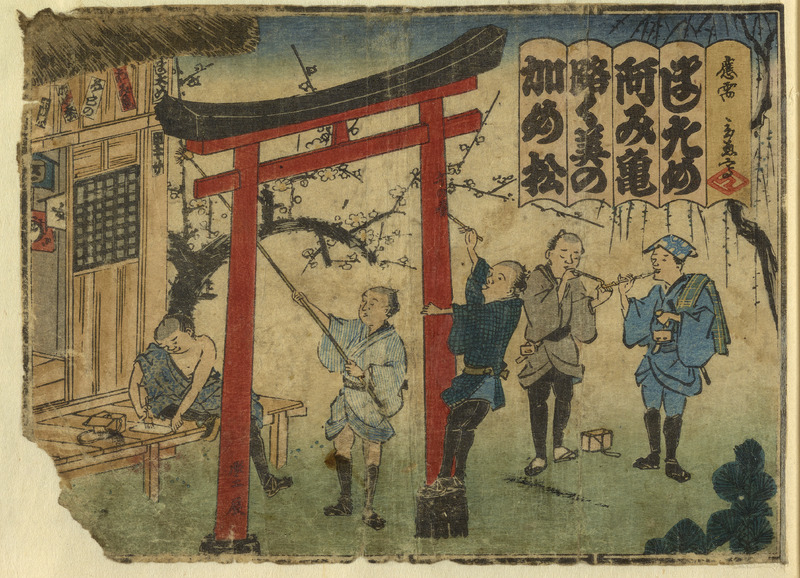 The slip on the left above is a typical daimei senjafuda, as might have been pasted at a temple or shrine. The smaller characters at the top indicate the neighborhood the paster lived in (Kanda), while the larger characters that make up most of the design are the daimei. Typically daimei senjafuda were printed in black; this one is a faded red. Given the torn condition and traces of adhesive on the back (visible from the front at the bottom of the slip), it is speculated that this slip might have been removed from a wall.

The slip on the right above shows a group of pasters out practicing their hobby. The scene is a Shintō shrine in early spring (indicated by the plum blossoms in the background). The corner of the shrine building can be see on the left side of the print; through the door can be glimpsed three ema hanging on the wall. The man sitting on the veranda is applying glue to the back of a slip in preparation for pasting. Next to him stands a man holding the distinctive pasting pole: a collapsible pole with two brushes mounted on the end. The slip would be attached to these brushes so that the paster could place it high overhead. Next to the paster, another man has climbed up onto the base of the gate so he can write his name directly onto it with ink. At right, the other two members of the party are smoking their pipes (one lighting his pipe from the bowl of the other). At their feet is a wooden chest containing senjafuda. 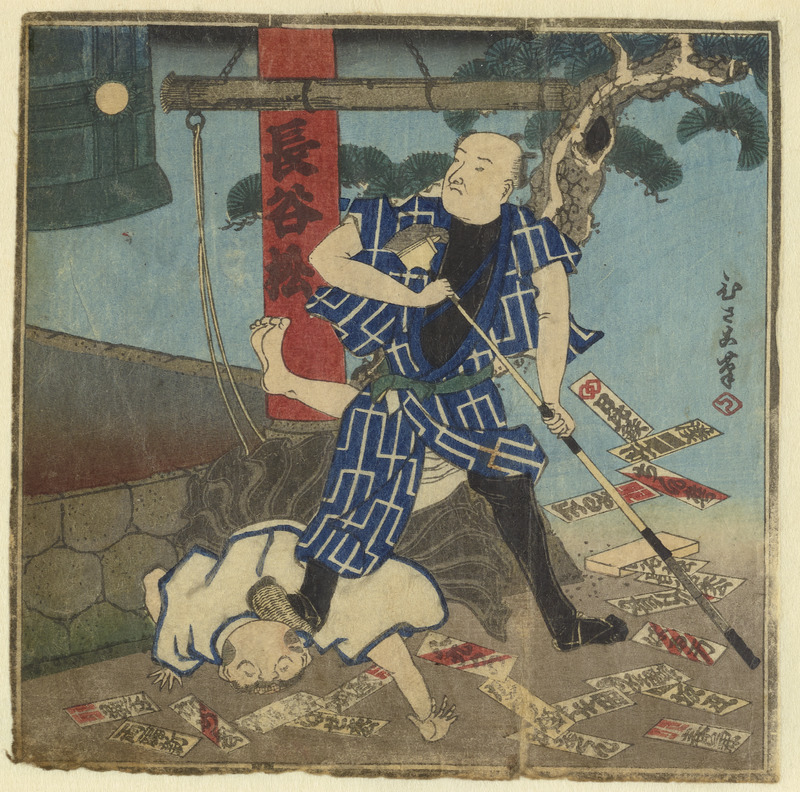 The slip on the left above shows more pasters in action. The man on the right is holding a pole with brushes mounted on the end, which he’s using to paste his daimei slip to a gatepost. The man on the left is writing his daimei directly on the gatepost with ink. Both pasters are depicted as handsome, well-coiffed men in rakish short coats of the type worn by firemen or laborers; a tattoo may be seen on the left forearm of the man on the right. The statue looking down on the pair may seem demonic, with its red flesh, bulging muscles, and wild expression, but it is in fact a Niō or Benevolent King, a Buddhist protector figure; statues of them are often placed in pairs in temple gates. A protective wire mesh has been installed in front of this one—to prevent it being defaced by senjafuda enthusiasts?

The slip on the right above shows a senjafuda enthusiast in an altercation with a priest. The scene is a Buddhist temple, as indicated by the large bell partly seen in the top left, meant to be struck with the log suspended over the men’s heads. The man at the center of the composition is clearly a paster caught in the act—he holds a pasting pole and slips are scattered on the ground around him. At his feet is a man dressed as a temple acolyte. Evidently the acolyte was tasked with chasing away the paster, but their encounter grew violent, and the paster won. The men’s pose, with the paster brandishing his pole like a weapon and trampling the priest underfoot, is (no doubt intentionally) reminiscent of statues of the Shitennō or Four Heavenly Kings often found at temples. These kings, protector figures like the Benevolent Kings mentioned above, are usually depicted in armor and brandishing swords or spears, and are often shown treading on enemies of the faith depicted as demons. This slip, therefore, shows a role reversal, with the senjafuda paster in the position of defender of Buddhism and the acolyte placed in the position of antagonist. It’s a comic conceit (and a fairly common one in senjafuda), but also quite revealing of the self-image of senjafuda aficionados.

As Takiguchi Masaya argues,[1] this spirit of play was part of senjafuda practice from the beginning, i.e. the 18th century. Religious devotion or the desire for blessings may have motivated people to paste their slips on temple or shrine walls, but when pasters began to compete with each other to place their slips in difficult locations, or in as many different shrines and temples as possible, they were acting in a spirit of play. In other words, Takiguchi argues, the senjafuda phenomenon was always a fusion of religious practice with play—a fusion quite characteristic of early modern Japanese popular culture. This play would find its fullest expression in senjafuda clubs.

The slip above—already discussed above as a depiction of pasting activities—is also an expression of the social aspect of senjafuda pasting culture. The pair of pipe-smokers at the right lend an air of camaraderie to the scene, while the plum blossoms emphasize the recreational nature of this outing. This slip can be dated with some certainty, because the man writing on the gate is actually writing, not his name (as the viewer is meant to assume at first glance) but “Spring, Year of the Horse.” Based on the daimei included in the slip, this should be either 1858 or 1870. Note that five men are depicted in the scene, but in the colophon at top right, only four daimei are included. The fifth man is probably identified in the rightmost panel of the colophon, which says “made to order by Gengyo.” Baisotei Gengyo 梅素亭玄魚 (1817-1880) was a print designer and author active in a variety of popular fields in the late Edo and early Meiji years; he was also a key figure in senjafuda culture in that era, under the daimei Takisa 田キサ. The man with the pasting pole appears to have just finished pasting a senjafuda that reads Takisa, suggesting that Gengyo himself is the fifth member of this party, and has self-effacingly placed his daimei in miniature within the illustration instead of in large characters with those of the other four men.