Influential yōkai scholar Michael Dylan Foster uses the images of “pandemonium” and “parade” in his discussion of historical depictions of yōkai. He derives both of these images from a classic medieval illustrated scroll known as the Hyakki yagyō emaki 百鬼夜行絵巻, or “Picture Scroll of the Night Parade of a Hundred Demons.” This scroll—actually there are many variants, so maybe we should say “these scrolls”—depict the old belief that on certain nights, monsters would parade through the streets of the city. For citizens, no doubt this was a terrifying prospect, but for artists it was an opportunity to capitalize on the format of the picture scroll (with its seemingly limitless horizontal expanse) to show a dizzying variety of monsters filing past the viewer in what seems, paradoxically, like an orderly procession.

Foster notes that in the “Night Parade” scrolls we can identify tendencies that surface again and again in depictions of yōkai: a tendency toward unrestrained imagination on the one hand, and a countervailing tendency toward neat categorization and presentation on the other. As Foster writes, the imagination of yōkai is always veering “between a frightening, chaotic pandemonium and a light-hearted, well-ordered parade.”[1] 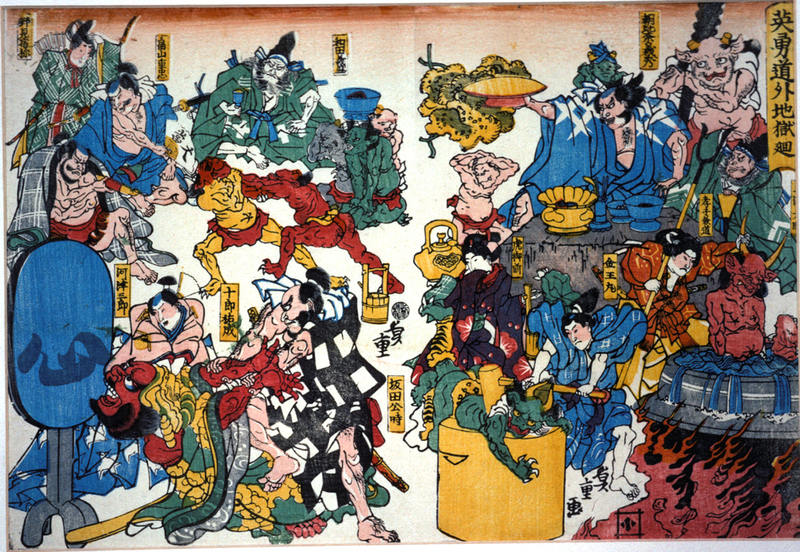 The diptych above nicely captures the idea of pandemonium, in both a literal and a figurative sense. It's by Utagawa Sadashige 歌川貞重, who changed his name to Utagawa Kuniteru I 歌川国輝 in ca. 1847 (which places this print in the early or mid-1840s). Entitled Heroes Clowning Around on a Tour of Hell (Eiyū dōke jigoku meguri 英雄道外地獄廻), it shows a number of famous heroes from history and legend in, as the title suggests, hell. True to form, the heroes have conquered the place, turning the tables on King Enma and his oni servants. The composition shows a number of humorous vignettes, many of them reversals of what one would expect from a hell scene. In the bottom left we see several heroes manhandling King Enma himself, forcing him to look into his sin-revealing mirror (it says "heart"). In the top left a group of heroes is avidly watching a red demon and a yellow demon put on a display of wrestling; more demons look on glumly, as if afraid they're next. In the top right Asahina Yoshihide is being waited on hand and foot by demon attendants. Meanwhile, in the bottom right, heroes administer to demons some of the same punishments those demons are famed for meting out to sinners: boiling in a cauldron and being pounded in a giant mortar. The image quite literally shows pandemonium (all, or in this case just a lot of, demons), but on a figurative level it captures the wildness of the concept through the anarchic comic reversal of torturing demon torturers.

Foster’s concepts of pandemonium and parade help us understand the way yōkai are depicted in senjafuda, particularly in series or large-scale slips that show multiple yōkai. Renfuda, series of senjafuda planned and executed collectively by a club of aficionados, turn out to be a perfect format for presenting yōkai as discrete, categorizable phenomena—the parade idea. At the same time, even the most catalog-like depictions of yōkai are destabilized by excess: a superabundance of humor, imagination, or grotesquerie.

Foster bases his concept of parade specifically on the legendary hyakki yagyō, but yōkai legends include at least one other kind of parade: the fox wedding procession. When rain falls from a clear sky—something any child recognizes as spooky weather—legend has it that it means shape-shifting foxes are getting married. Film buffs may recall that Kurosawa Akira’s last film, Yume (Dreams), includes an appropriately eerie dramatization of a fox wedding procession. The first slip below shows just such a parade in its lower register, in enchantingly sketchy brushwork. 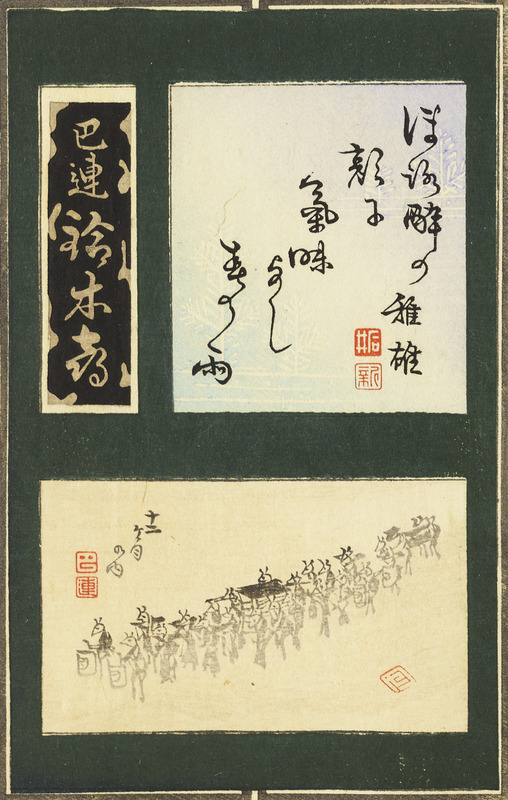 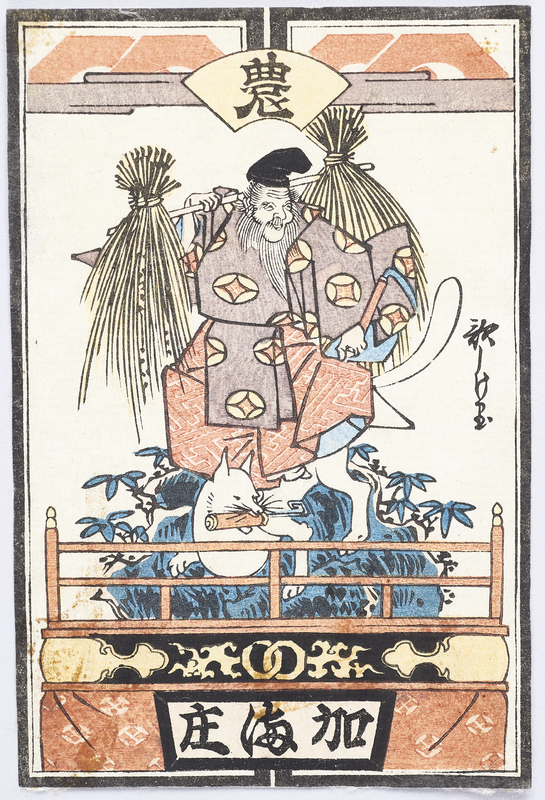 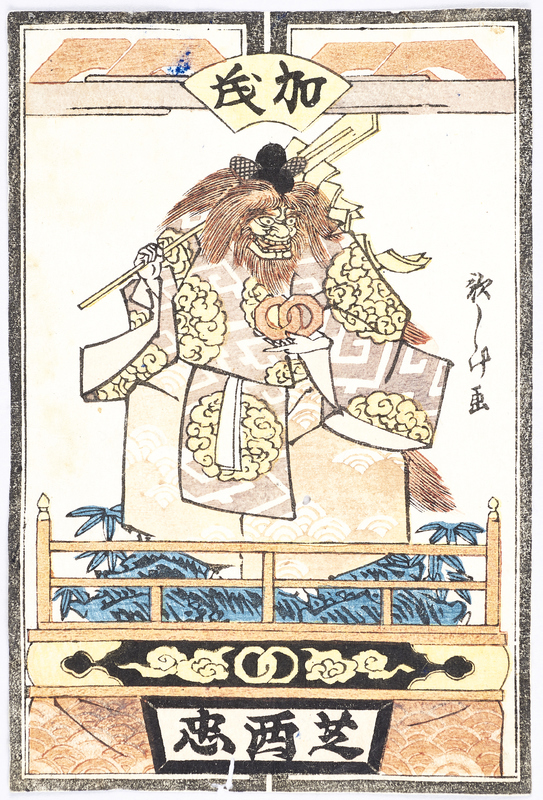 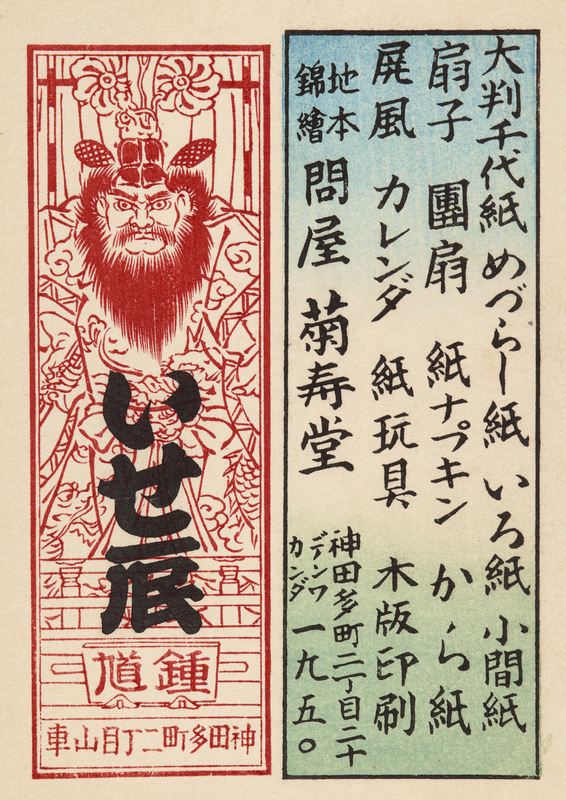 The second, third, and fourth slips above show yōkai being used in a real-life parade, the Kanda Myōjin Shrine Festival procession. Kanda's was one of Edo’s biggest festivals, and featured large floats topped with mannequins depicting figures from myth and legend. Many senjafuda groups were and are also involved in supporting the shrine and its festival, and depictions of the festival’s floats (each sponsored and maintained by a specific neighborhood) are common in both the Starr and Shōbundō collections.

The second and third slips above are credited to Utashige, or Utagawa Hiroshige 歌川広重 (1797-1858), one of the most famous and influential of woodblock print artists, suggesting that they date to the mid-19th century (see Exchanging for more of Hiroshige's work). The second shows the god Inari and one of his fox servants. The third shows the god Wake-ikazuchi no kami, a thunder god worshiped at the Kamo Shrine in Kyoto, as depicted in the noh play Kamo.

The final slip shows, on the left, the Kanda Festival float depicting Shōki. For further details on this slip see the “Nostalgia” page.

Foster uses the idea of parade to express the way many depictions of yōkai try to present them in an orderly fashion, with the suggestion that controlling the supernatural in this way allows us to approach it with delight rather than horror. These depictions of yōkai (and gods—the line between them is often thin) as used in an actual parade take that idea quite literally, as the celebratory atmosphere of the festival balances out or simply overwhelms any potential fear these creatures might inspire.

The following pages will explore collective depictions of yōkai in senjafuda along with similar items from the collection of the Jordan Schnitzer Museum of Art.