Pictures of Tilling and Weaving 耕織圖 (Gengzhitu) is the title for a series of scroll paintings first created in the Southern Song Dynasty (1127-1279) by an official named Lou Shou 樓璹 (1090-1162). His paintings showed scenes of different work processes of agriculture and sericulture. Though the original scrolls no longer exist, the ideological content has been transmitted through copies. The twenty-one scrolls dedicated to agriculture show the work that is required in rice production throughout the seasons, from the preparation of the soil in spring to the rice harvest in the fall. The twenty-four images of sericulture cover the production of silk, from the picking of mulberry tree leaves for feeding the silkworms to the weaving of the silk fabric.

Each scroll was accompanied by a poem referencing the respective scene. As a sequence, the scrolls and poems depict the work processes and the technology involved, but the paintings were more than mere documentation of labor steps and tools. They gained great prominence as the pictorial representation of a social contract between the emperor and the working people with the goal of a peaceful society. In essence they show that when imperial rule is well-balanced, the people produce food and clothing. If this balance is disrupted, essentials are in short supply and thus the state itself is in jeopardy.

The ideal distribution of work captured in the old saying ‘men plow, women weave’ reflects the division of labor in the household production of taxes that had to be paid in grain and bolts of silk. Thus, agriculture and sericulture came to symbolize the basic pillars of a well-ordered state. In fact, these genre scenes became so prominent, that the category of paintings and prints depicting labor in rural settings was entitled Pictures of Tilling and Weaving.

This genre has been cherished ever since its emergence: as a symbol for political stability and economic prosperity, emperors repeatedly commissioned scenes of the genre, aligning themselves with the ideal emperors of high antiquity whose graceful rule was hailed as the basis for peace in the realm.

The military conquest by the Manchus who established the Qing dynasty (1644-1911) left China in devastation. Agriculture and sericulture suffered while the new government concentrated on asserting their rule through the persecution of Ming loyalists and the establishing of order under new laws. Fifteen years after Qing rule began, agricultural production saw signs of improvement when land was restored to farmers and the cultivation of mulberry trees was encouraged to secure silk production for the state. The second Qing emperor, Kangxi (1654-1722; r. 1662-1722) commissioned a new series of paintings based on the Song model of Lou Shou’s Pictures of Tilling and Weaving. The set was completed in 1696 in forty-six images by Jiao Bingzhen 焦秉貞 (1689-1726),[1] who included Western perspective in his version of the illustrations. Each painting received a comment and a poem by Emperor Kangxi. Sixteen years later, Kangxi commissioned the paintings to be printed and distributed for the promotion of agriculture and sericulture. Later emperors encouraged the works of agriculture and sericulture in recognition of their essential role in maintaining a thriving state. Several followed the imperial tradition of patronizing rituals of sacrifices to the agricultural deities by the emperor and to the deity of sericulture by the empress in their calendar of rituals. Another set of Pictures of Tilling and Weaving was painted by the Italian Jesuit Giuseppe Castiglione (1688-1766; Chinese name Lang Shining 郎世寧), an artist active at the court of emperors Kangxi (r. 1661-1722), Yongzheng (1678-1735; r. 1722-1735) and Qianlong (1711-1799; r. 1735-1796). Government officials used the prints as a didactic tool to teach the importance of dedication to agriculture and sericulture to ensure that the people of the realm were dressed and well-fed. Artists used the imagery from pattern-book versions to copy scenes for albums and embroidery. In the nineteenth and early twentieth century foreigners in China shopped for printed versions of the scenes captured in watercolors, usually without understanding the context of these depictions, which by that point had morphed into generic scenes of daily life in traditional China. Pictures of Tilling and Weaving came to adorn sets of decorative porcelain tea sets and ink cakes. Emperor Qianlong commissioned several sets of ink cakes with his poems that were produced by the master of ink production in the imperial office, Wang Weigao 汪惟高 (fl. mid 18th century).[2] As one of the ‘Four Treasures of the Scholar’s Studio’ 文房四寶 (paper, ink, brush, and ink stone) the décor of ink cakes was entrusted to master ink makers.

The genre scenes of Tilling and Weaving found reception in Japan (see the section on the Utamaro prints on this site) and Korea as well. Gertrude Bass Warner’s Korean collection includes an eight-panel folding screen that shows both sets of genre scenes: the top third of each panel shows agricultural production scenes, the processes of sericulture are displayed in the middle ground, and the bottom of each panel presents abstract designs of the characters for Long Life 壽 (pronounced su in Korean, shou in Chinese) and Wealth 福 (in Korean pronounced bok, fu in Chinese) which taken together symbolize happiness. As a pictorial unit the images of the screen can be read as the wish for a happy life in a world of order and peace.

Pictures of Sericulture by KITAGAWA Utamaro

Utamaro’s print series also reflects the popularity of illustrations of crafts that made their way from China and since the seventeenth century inspired various Japanese artists, who included indigenous loom variations in their own illustrations of the sericulture process.[5]

Several editions of Utamaro’s prints have been produced. The latest dates to the late 19th or early 20th century and does not include explanatory texts in the scalloped clouds at the borders. The editions also vary in color: The first edition included violet, blue, green, yellow, and gray using the ‘purple-picture’ (murasaki-e) color scheme; a later edition adds red. The content of the scenes differs slightly from the Chinese prototypes: Utamaro’s series does not include the mercantile scene in which bolts of finished fabric are shown to customers, which is no surprise given his intended allusion to the pleasure quarters.

Description of the twelve scenes

(Translations added to the description of the first six prints are by Shūgō ASANO and Timothy Clarke.[6])

Silkworms feed and rest alternatingly. In the four dormant phases the growing silkworms are transferred and distributed on different trays, providing additional space.

The imagery of prints 11 and 12 overlaps: The loom traverses both prints. 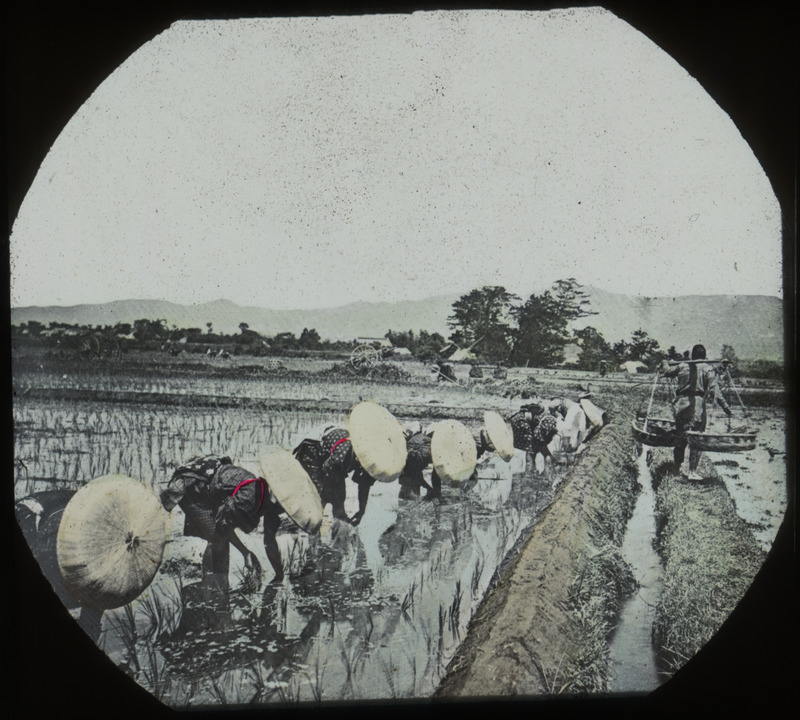 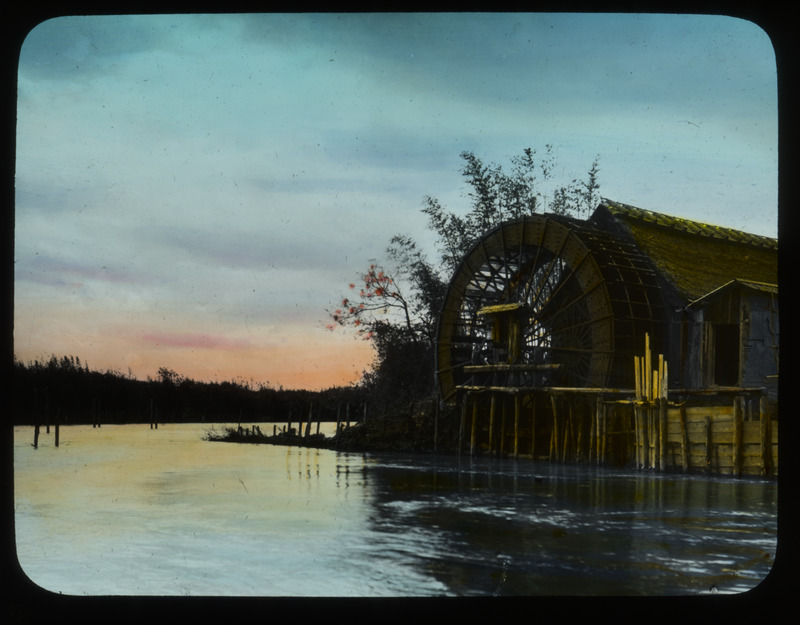 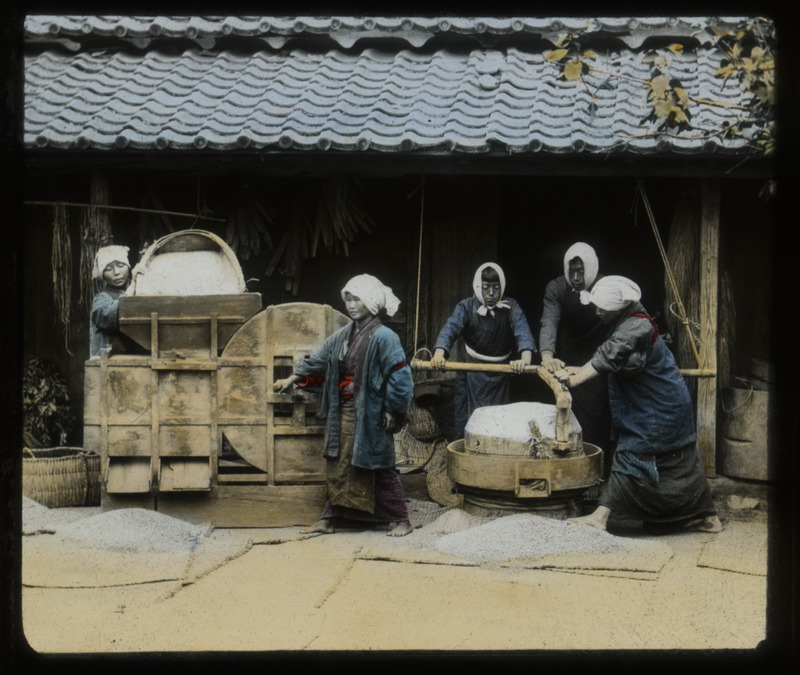 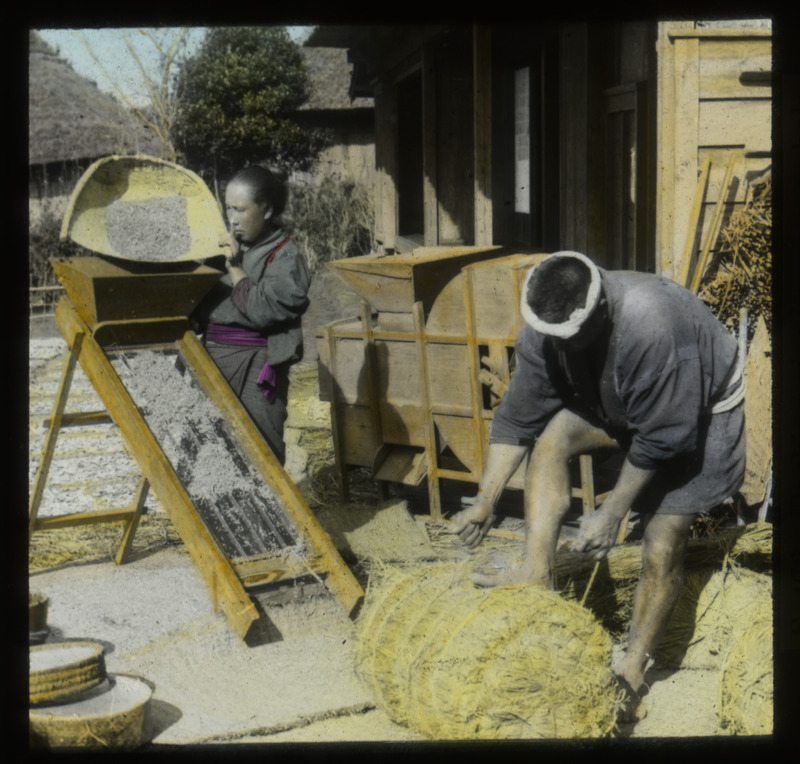 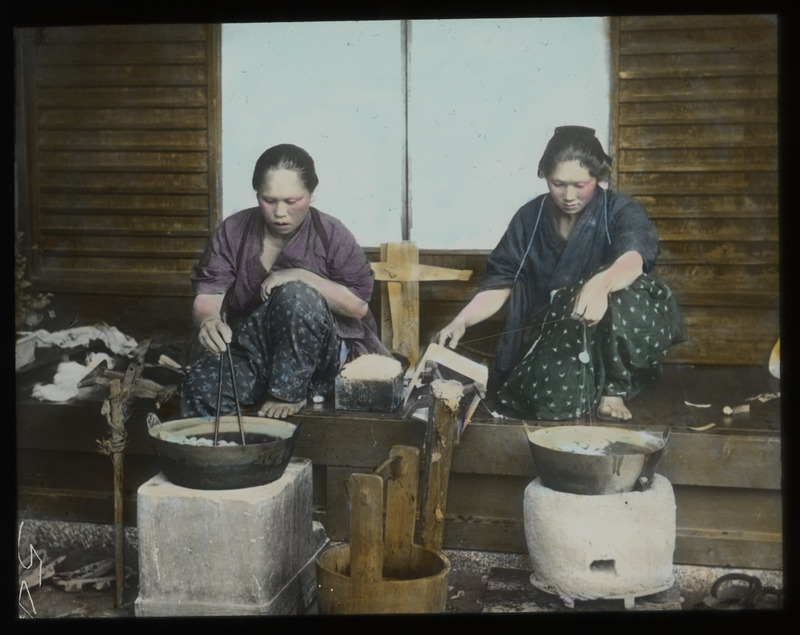 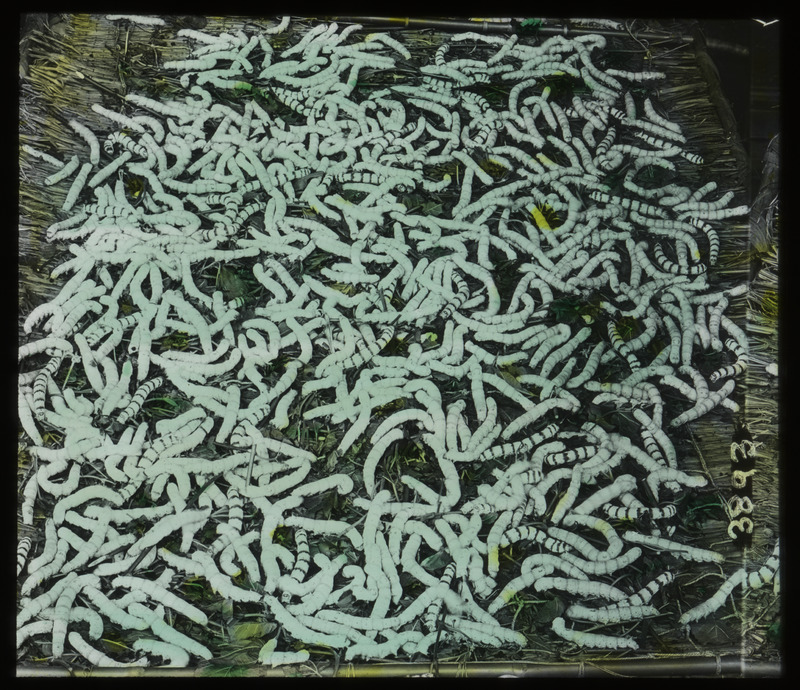 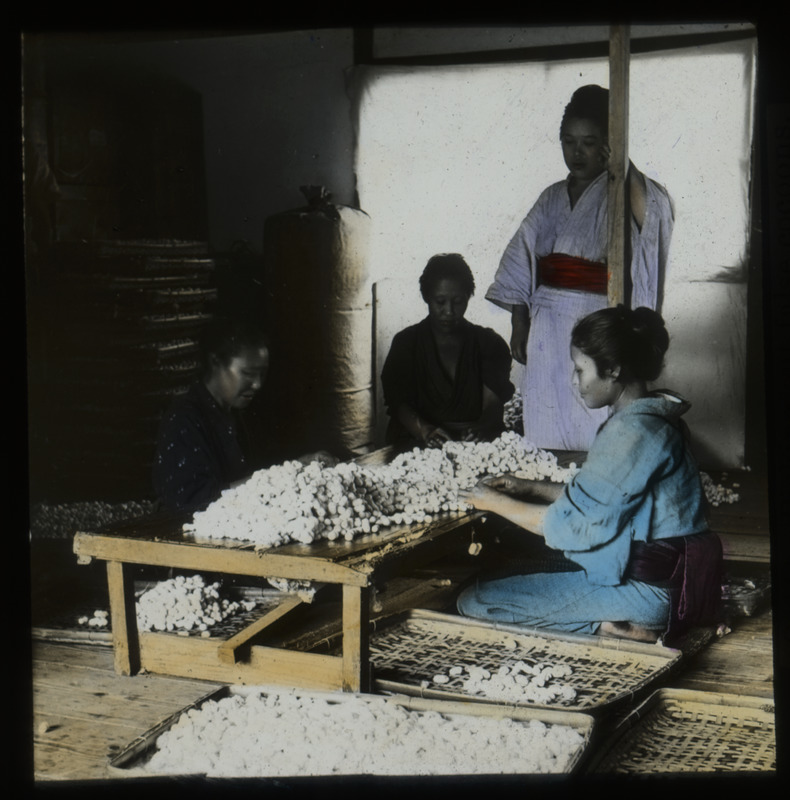 [1] Today only two colored copies of the woodblock print series exist, one in the collection of the National Library in Beijing, the second in the library of East China Normal University.

[5] In circa 1772 KATSUKAWA Shunshō and KITAO Shigemasa created a series of separate sheets on the same topic entitled Kaiko yashinai-gusa, which were printed as an album in 1786. (Asano, Shūgō and Timothy Clark, The Passionate Art of Kitagawa Utamaro. London: The British Museum, 1995, text volume, 204).