While John Ferguson and Normann Munthe were Gertrude Bass Warner's primary collaborators, her network of fellow art buyers and collectors also included others living and working in China around the same time. Learn more about them below.

Ruth Clarke was a niece of Gertrude Bass Warner and came to collect art for her aunt when Gertrude planned her art museum for the University of Oregon. Ruth Clarke was born in 1890 to Presbyterian medical missionary parents in Weixian, Shandong Province. Growing up, Ruth learned to speak Chinese fluently. She was educated in a private school called “Miss Jewell’s School”[1] in Shanghai and left China to attend Wilson College in Pennsylvania. After graduation in 1912, she returned to Shanghai where she re-joined Miss Jewell’s School, now as a teacher. In 1916 she transferred to Beijing to teach at the Peking American School. Here she also met her husband, J. Eric G. Clarke, a son of British missionary parents, who was also born in Shandong.[2] Eric had attended the “Chefoo School” (Zhifu School 芝罘學校, or Protestant Collegiate School, China Inland Mission School),[3] a boarding school for the children of missionaries.[4] Eric Clarke worked for the British stock broker firm J.P. Bisset & Co., and later founded his own company, E.G. Clarke & Co.[5] After the Clarkes were married on June 21, 1916, in Ji’nan, Shandong, they moved to a traditional courtyard house in 15 Tin Ying Hutong, Beijing, where they lived for the next sixteen years.

During this time Ruth Clarke accumulated a large collection of artworks from the Ming and Qing dynasties (1368-1911)[6] and arranged multiple charity and sales exhibitions in New York galleries.[7] Like many other foreigners living in China at the time, the Clarkes were sent to an internment camp after the Japanese invasion of Shanghai in the second Sino-Japanese War (1937-1945). From April 10, 1943, until their liberation two days after the Japanese surrender in August 1945, the couple was interned in the Longhua military internment camp, which consisted of fifty-nine dormitories and 127 family chambers and held captive 1,889 foreign nationals.

According to a story published in the Alumnae Quarterly of Wilson College from January 21, 1962, Ruth managed to smuggle two small jade carvings from her personal collection by hiding them in a sandwich, when she and her husband were first sent to Longhua Camp.[8] While living in the camp, Ruth Clarke apparently served as “chief of police.”[9]

The majority of objects Clarke offered to Gertrude Bass Warner were made from her favorite material, jade, but Clarke also sent jewelry and textiles[10] to her aunt, a few of them as gifts. In 1924 she sent pieces of jewelry,[11] several ceramic jars,[12] and textiles.[13] The bulk of the items from Clark came to Warner in 1925, including glass vases,[14] a variety of jewelry items,[15] jade carvings and pendants,[16] and furniture pieces,[17] and a coat which Clarke liked specifically. On April 5, 1925, she wrote to her aunt and mentioned the coat: “There is one lovely old brocade coat in gold thread brocade of the hundred children at play on midnight blue satin, that is a perfect beauty. … It is my coat of happiness.”[18] In 1927, Clarke sent jewelry,[19] furniture,[20] and again textiles.[21] Three years later, on September 5, 1928, she remarks to her aunt in a letter that she “undervalues” the objects on the shipping forms, because the Nationalist government had begun to raise temporary taxes at the time. The year 1933 yielded another textile shipment.[22] In 1947, after the Clarkes were freed from Longhua camp, Ruth sent her aunt a few items of jewelry.[23] 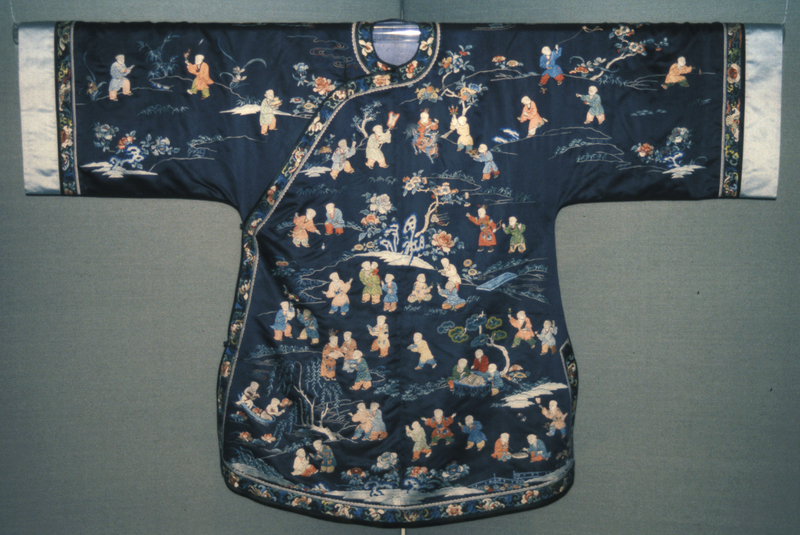 A decorative hanging acquired by Warner through Clarke

Several among the items sent by Ruth Clarke are ambiguously dated, among them one of the textiles shipped during the “1920s,”[24] or not dated at all, like various pieces of jewelry.[25] The Clarkes returned to the United States in 1946, and according to an entry in the Alumnae Quarterly of Wilson College from May 1949, Eric and Ruth Clarke settled in Portland, Oregon,[26] where Ruth Clarke served as president of Zonta International and the Lewis and Clarke's Women's League. The family records state that Ruth Elliott Johnson Clarke resided in Mountain View, California, in 1999. The records contain materials from 1904-1968; no death date is given for Ruth Clarke or her husband in the papers.[27] 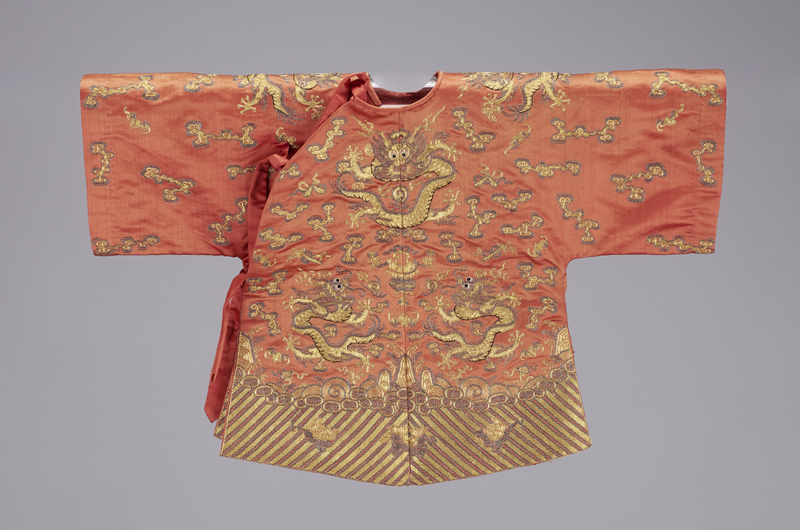 Gertrude Bass Warner acquired this image robe from Ruth Johnson Clarke, who had purchased it from Madame Silva. 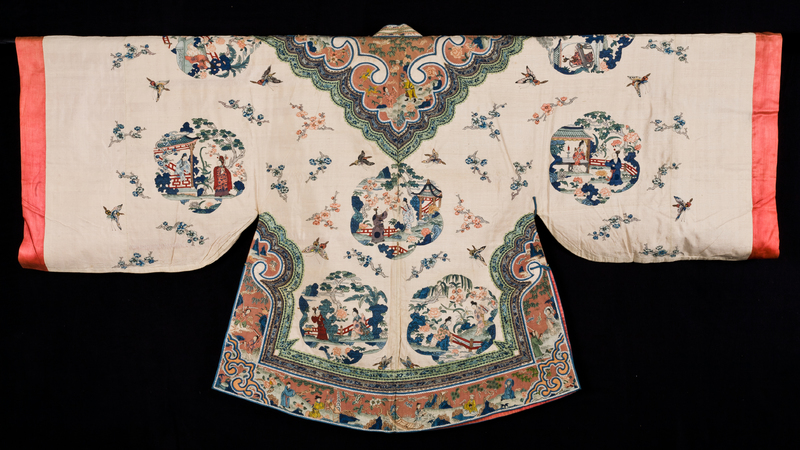 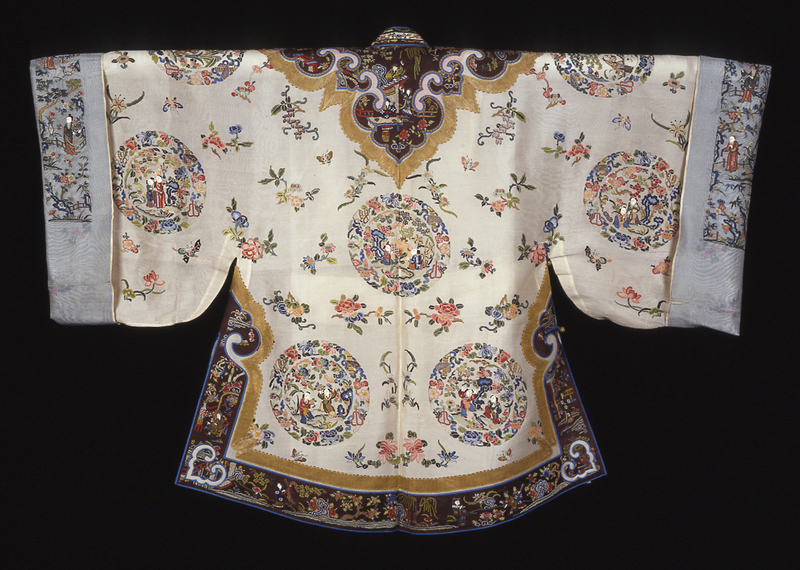 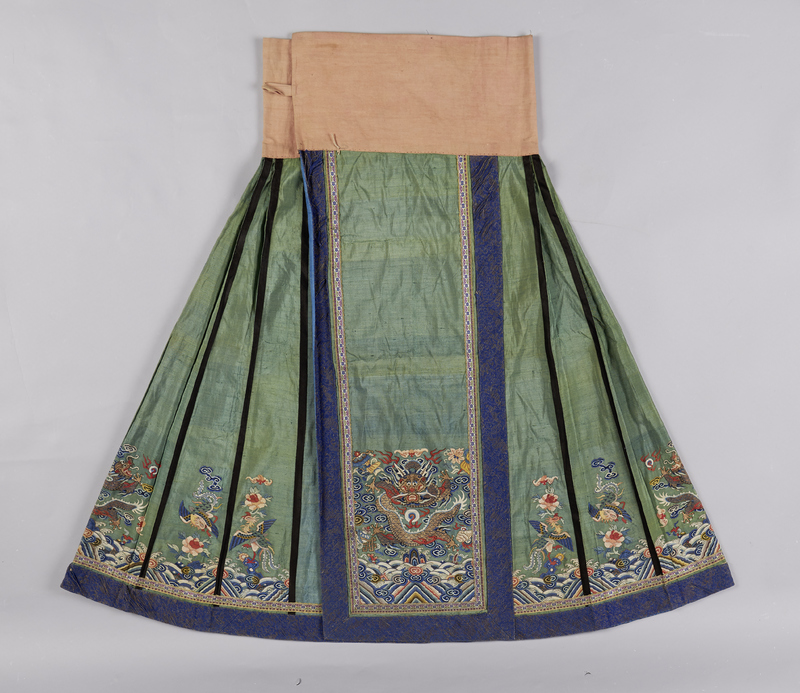 There were several other individuals from whom Gertrude Bass Warner acquired pieces for her collection, but she also bought pieces from commercial art dealers, such as Yamanaka & Co. 山中商会, with its main seat in Osaka (closed in 2003). Yamanaka at times had branches in Tokyo, Kyoto, New York, Boston, Chicago, London and Beijing. W.W. Taylor’s in Seoul was another commercial dealer. The store was located opposite of the Chosen Hotel in Seoul, then a popular destination of foreign travelers. Its owner, Albert Wilder Taylor, originally from Nevada, who had started his business in Seoul in 1896, recently came to be honored for his ties to the Korean revolt against Japanese colonial rule in 1919. Taylor had worked as a part-time journalist for The Associated Press and had reported to the international community about the brutal response against the Korean protesters by Japanese troops. The report had been smuggled to Tokyo in his brother Bill’s shoe. Further reports followed. When his wife gave birth to their son on February 28, 1919, in Seoul’s Severance Hospital, the couple found hidden in her bed copies of the “Korean Declaration of Independence.” They had been placed there by a nurse, who had witnessed the confiscation of the printing press that Korean patriots had secretly operated in the hospital basement. The prints escaped detection in a raid of the hospital by Japanese soldiers.[28]

The family home he had built in Seoul on a slope of Mount Inwang in 1923, which in the family had been called “Dilkusha,” a Hindi term for “Utopia” (verbatim “Heart’s Delight”), had been deserted by the Taylors when they were expelled from Korea by the Japanese authorities in 1942. Eventually the house had been taken over by squatters. Recently rediscovered by a Korean Professor of Film at Seoul University, the government planned to resettle the squatters and restore the building.[29]

[18] MWCH45:19; Gertrude Bass Warner papers, Box 05, Folder 01, pp. 46-7. Clarke was also able to purchase a set of eighteen golden objects (such as a brush holder, a support for the ink cake, a water receptacle, and incense burners) made for use on the imperial desk that had been presented to emperor Qianlong in 1783 by the Mongolian Prince Baotai as a token of gratitude for his dispatch as an official envoy to Tibet. The gift had been turned over to bankers who sold this and other treasures to Clarke and other collectors to cover the debts of ca. $ 6.000.000 (in Mexican Silver Dollars) when the young emperor Xuantong 宣統帝, better known as Aisin Gioro Puyi (r. December 2, 1908-February 12, 1912; 1906-1967) went into foreclosure. Clarke’s purchase of ‘Emperor Qianlong’s Gold Treasure’ became a sensation among collectors in the United States when Berthold Laufer evaluated the objects for authenticity in the vault of the National City Bank in New York and published his report on June 22, 1929. (Gertrude Bass Warner papers, Box 05, Folder 01, pp. 94-115.)

[21] MWCH40:10, 11; and MWCH45:19. The coordination of objects and years when Clarke sent them from China to Eugene was originally composed by JSMA intern Caitlin N. Stacy in July 2015.

[28] An account of the events is given in the memoirs of Mary Linley Taylor, titled Chain of Amber (published in 1992, ten years after the author’s death). https://www.nytimes.com/2016/04/01/world/asia/south-korea-japan-seoul-dilkusha.html?searchResultPosition=1 accessed 05/22/2019.