The world of yōkai

The easy answer is that “yōkai” is simply a Japanese word for ghosts and monsters. The slightly less easy, but still pretty easy, answer—and the one that we’re using as a definition throughout this digital exhibition—is that yōkai are Japanese ghosts and monsters as imagined in early modern Japan. This is important to keep in mind, because most of the senjafuda featured on these pages were actually made in the modern era—the early 20th century—but they’re depicting yōkai in ways that were codified a hundred or more years earlier. 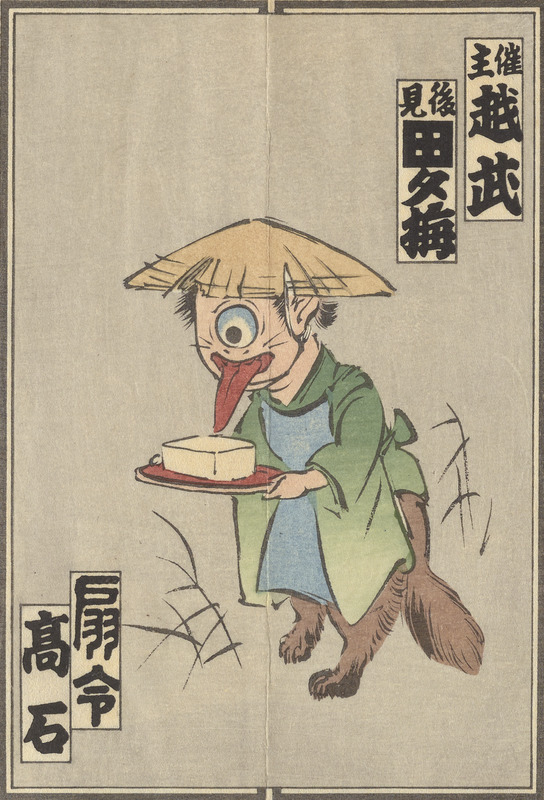 This slip is from the early 20th century, but the yōkai in it is dressed for the early 19th century.

Beyond that, yōkai are notoriously hard to define. The difficulty begins with the term yōkai 妖怪 itself. It consists of two characters that both basically mean “strange,” but with different overtones. The first can also be thought of as meaning “enchanting,” with both the magical and the charismatic nuances of that word. The second can be thought of as meaning “mysterious” or even “scary.” As words for a thing they’re pretty vague, and together they’re just doubling down on the vagueness: “that which is strange in sort of mystical ways” is about the sense of it.

Colloquially, of course, the term has come to mean a fairly specific thing (ghosts and monsters), but only comparatively recently has it become the preferred term for that thing. Historically, and even today, other words have been and are used for (almost?) the same thing: ayakashi, bakemono, mononoke. Scholarly and popular usage seem to have settled on yōkai as the basic descriptor now, but you’ll still encounter these other words. There's also disagreement about what belongs to the category of yōkai and what deserves its own, or a different, category. Ghosts and oni (demons/ogres) are two examples: some people feel they're yōkai, other people argue that they're not. On this site we're taking an inclusive approach, so ghosts and oni are in.

Ghosts and monsters of one kind or another have been present in Japan for a long time—as is probably true of most cultures, Japan’s earliest myths are populated with creatures that, for a later reader, defy belief, or perhaps invite it. As continental learning entered Japan it brought with it stories of more fantastic creatures connected with Buddhism, or with ancient Chinese legends. Many of these older monsters live on today in the popular imagination—tengu and foxes are two examples. Stories of those and other supernatural manifestations were mainstays of fiction and theater throughout the medieval period.

Yōkai as popularly conceived today certainly include creatures that can be traced back to the beginnings of Japanese history. But for the most part the way they’re conceived of—the way they’re visualized—is based on imagery that was codified in the Edo Period (ca. 1600-1868). This is a period that historians often call the Early Modern period, because in this period Japan began to develop institutions and attitudes that, while not completely modern as most people understand the term, were obvious breaks with the past in a way that anticipated or perhaps even led to modernity.

Among the things that make the Edo Period early modern is the emergence of a publishing industry. While most books before this period had been handmade for circulation among a small population of literate elites, beginning in the 17th century woodblock printing technology was utilized to mass produce books for sale or rental to an ever-widening audience of literate commoners. A publishing industry took shape, and with it what we can now recognize as a popular culture—i.e., a culture whose products were supported by broad-based commercial sales rather than elite patronage. This popular culture—often known then and now as the Floating World (ukiyo 浮世), or the culture thereof—was lived in many places, including theaters, brothel quarters, and Buddhist temple grounds (which often hosted carnival-like collections of shops and attractions). It also played out on the printed page, in popular fiction, comic books, and full-color prints—ukiyo-e, or “pictures of the Floating World.” If you’ve read the “World of senjafuda” section of this site you’ll recognize that senjafuda, or votive slips, can be seen as products of this Floating World culture, born of religious observance that doubled as play, and perpetuated through the woodblock printing industry.

Ghosts and monsters were mainstays of early modern popular culture. They featured in popular fiction, comic books, kabuki plays, and ukiyo-e. So popular were depictions of yōkai in the early modern period, and so creative were those depictions, that they have indelibly colored later generations’ perceptions of these monsters. This means that when you see yōkai today, they tend to be depicted in ways, and even wearing costumes, that date to the early modern period. This is why it’s best to think of yōkai as “traditional” (we’ll just say early modern) Japanese ghosts and monsters. Godzilla is Japanese, but it’s a modern creation associated with science—not a yōkai.

That means that there’s a certain amount of nostalgia bound up with the imagination of yōkai. In fact, the most celebrated modern revivalists of yōkai stories—folklorist Yanagita Kunio 柳田国男 (1875-1962) and mangaka Mizuki Shigeru 水木しげる (1922-2015) among them—have been fairly explicit about their goal of recording or perpetuating vanishing ways of life. Yōkai, for thinkers like these, embody values or beliefs that are threatened by modernity; thus, celebrating yōkai and perpetuating them in their early modern forms (i.e., just before modernity began to threaten them) is a way of critiquing or even resisting contemporary life. Again, if you’ve read the “World of senjafuda” section, you’ll see how much yōkai have in common with senjafuda culture: both are embodiments of a powerful nostalgia for the way things used to be, or more precisely the way we now imagine things used to be.

In the rest of the pages that make up this section, “The world of yōkai,” we’ll explore depictions of yōkai in senjafuda as a way of learning more about these creatures and how they were depicted in early modern (and modern) popular culture. In the “Yōkai, collectively” section we’ll look at several “group portraits” of yōkai, depictions of them in groups or in series that gesture toward a comprehensive view of ghosts and monsters. In the “Yōkai, individually” section we’ll go in depth with a select few yōkai to explore the variety of ways in which they’re depicted in senjafuda. 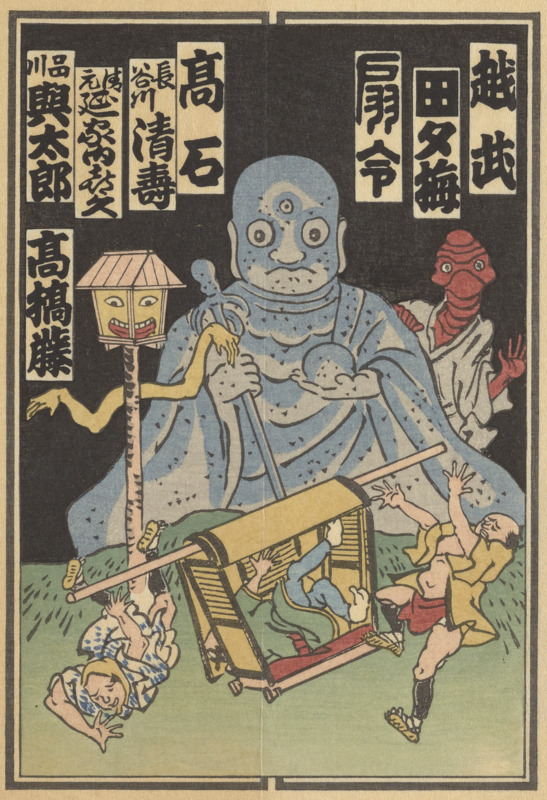