Ise Monogatari 65 The Young Love of Narihira
The emperor was splendid in both looks and figure. Listening to him chanting devoutly the Buddha’s name in his resonant voice moved the lady to bitter tears. She sobbed, ‘What cruel karma, to be bound as I am to that youth and so unable to serve His Majesty with all my heart.’ Eventually the emperor got wind of the affair and banished the youth. His mother expelled the lady from the palace, locked her up in a storehouse and gave her a good scolding. The imprisoned lady wept: It was indeed my own fault / I was caught like a skeleton shrimp / in seaweed gathered by fisherfolk. / So let me raise my voice and cry, / but blame no one but me. (MacMillan 2016, p. 209)

Ise Monogatari 65
The emperor was a most handsome man. Listening to him chant the sacred name of the Buddha with impressive reverence and dignity, the lady shed bitter tears. “What a cruel karma it is that binds me to someone else instead of letting me serve such a sovereign,” she sobbed. In time the emperor learned of the affair and banished the youth. The lady’s cousin, the emperor’s mother, made the lady leave the palace, and shut her up in a back room to punish her. The weeping lady composed this poem in her prison: I weep aloud / For my own fault, / Blaming no other. (McCullough 1968, p. 113) 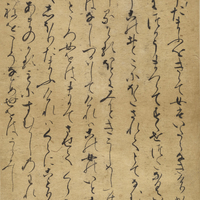 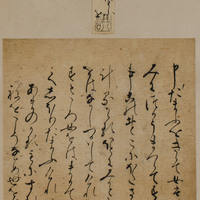