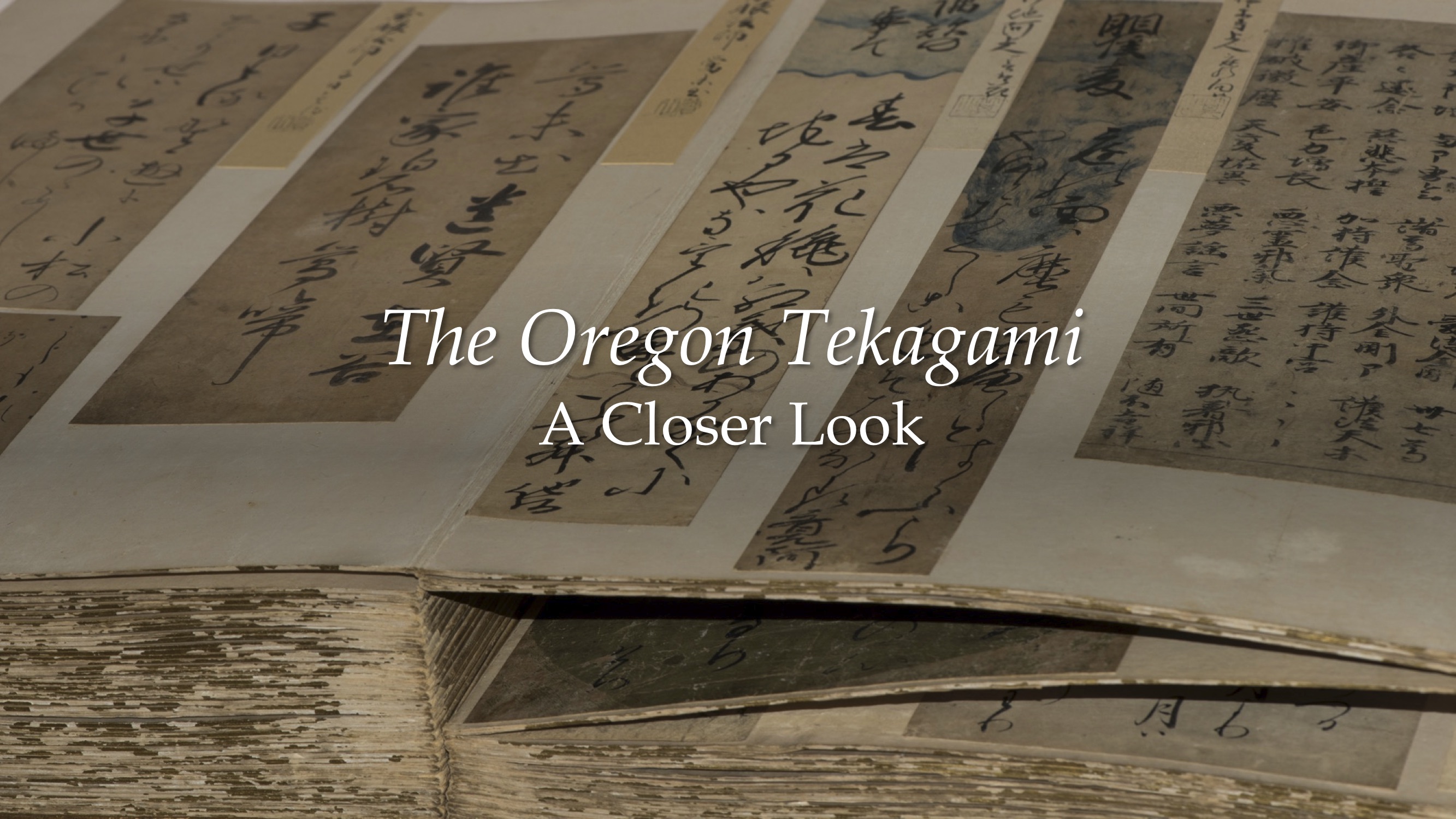 The front and back covers of the Oregon Tekagami are adorned with silk textiles with a floral pattern possibly done in part using gold threads. Metal finials with a vine motif done in silver inlay protect the four corners of the covers (Fig. 6, see below). The luxurious adornments not only provide variation in tactility as one handles the album, but also exude an aura that communicates the preciousness of the calligraphy fragments pasted inside. 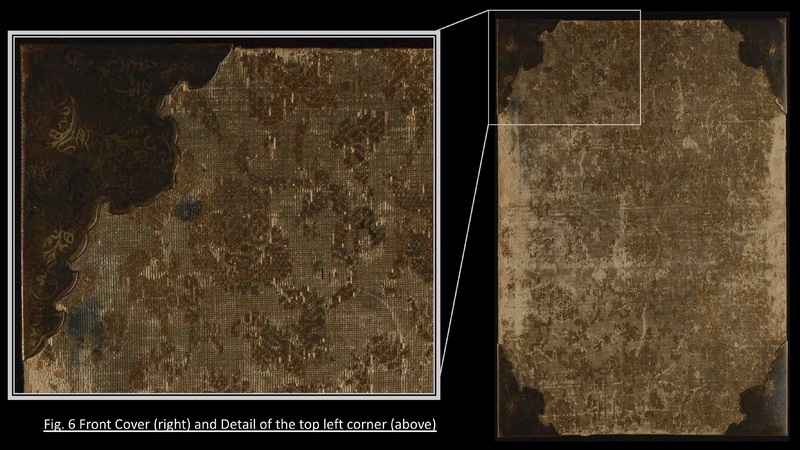 The album is thick and heavy and could be quite unwieldy to handle. The pages of the album are made of several sheets of paper of about 40 x 54 cm that were pasted one on top of the other for thickness. Thirty-three of these thick sheets of paper were then folded into halves and pasted together into an accordion-style album. There are thirty-four two-page-spread pages on the front side and thirty-three on the back. 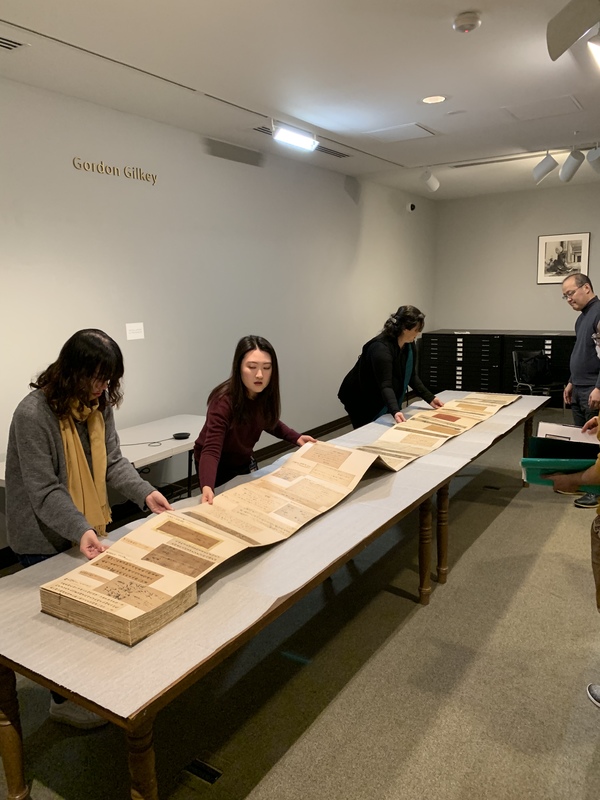 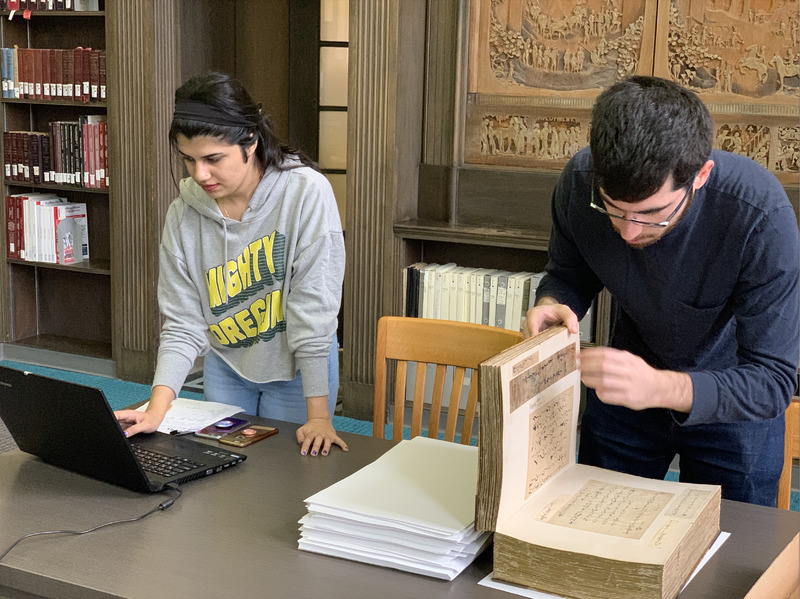 As we can see from the pictures of people viewing the album (above), unless one is very careful, the pages could tear at the joint. But the album was not just a vault to safekeep precious artworks, but meant to be handled. Thin strips of paper were added to further strengthen the left and right edges of the two-page-spread pages (Fig. 7, see below). The surface of the album pages is treated with mica to facilitate ease of pasting and peeling off fragments and kiwamefuda (see “Appreciating Tekagami” for more on this topic). 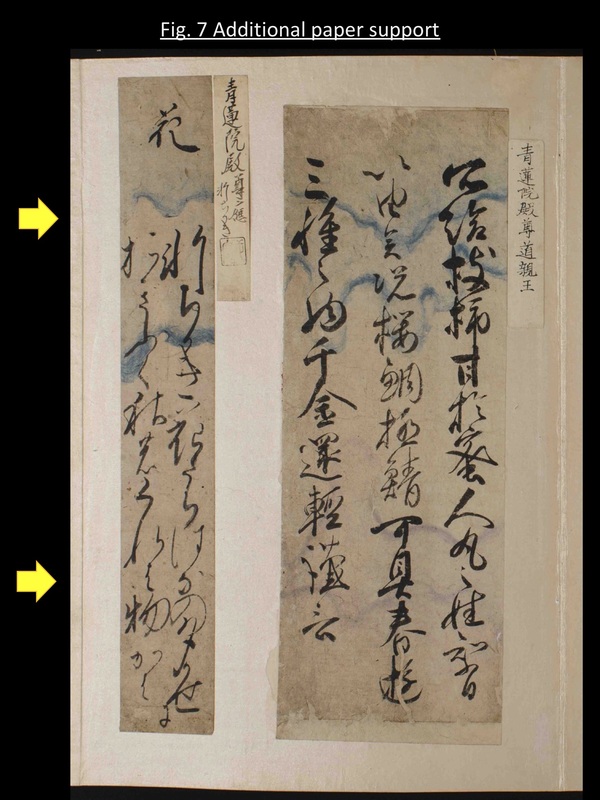 Where Does It Come From?

Comparable to examples of the most extravagant albums remaining today, the Oregon Tekagami holds a total of 319 kohitsugire fragments (156 on the front side, and 163 on the back). Recall that each kohitsugire was/is a precious (and in many cases pricey) artwork that needed to be acquired. The sheer number of fragments alone tells us that the Oregon Tekagami was at one point most likely someone’s family heirloom.

The UO library call number initially assigned to this album betrays that it entered the UO collection as part of Gertrude Bass Warner’s (1863-1951) original gift that constitutes the core of the East Asian materials at the Knight Library Special Collections and University Archives. No document is yet found that traces the provenance of this album any further. However, it is most likely that Mrs. Warner acquired this album during one of her visits to Asia between 1904 and 1929.

The 317 kiwamefuda still remaining on the Oregon Tekagami (two slips unfortunately fell off at one point and are now lost) exhibit seals and calligraphic hands of about twenty different kohitsumi appraisers. Based on the active dates of these kohitsumi, it is possible to speculate that the fragments included in the Oregon Tekagami were collected at two different times: first roughly between the 1670s and 1730s, and again around the 1790s-1850s.

The two groups of kohitsugire seem to be organically integrated within the same page of the album (Fig. 8, see below). The newest kiwamefuda are the ones prepared most likely by Kanda Dōhan 神田道伴 VII (?-?) who was active sometime before and after 1847. For this reason, it is probable that the Oregon Tekagami was assembled sometime around 1850 or later. 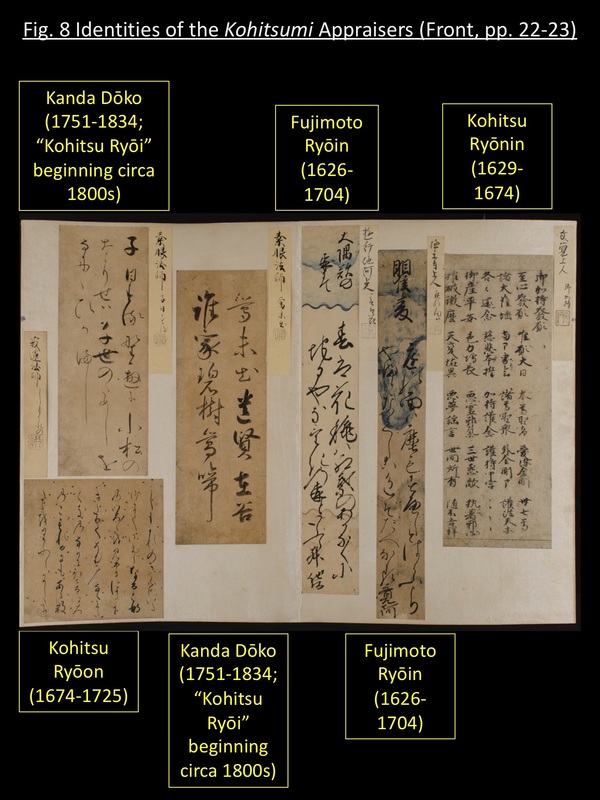