The Life of a Tekagami: Practice of Pasting and Repasting

The Oregon Tekagami includes kiwamefuda that were produced roughly in the 1670s-1730s and 1790s-1850s, but the album itself was most likely put together around the 1850s or a little later towards the end of the Edo period. Because kohitsugire were expensive commodities, it was common for collectors to take their time accumulating fragments, then pasted them into an album only after amassing sufficient number and variety.

The two clusters of fragments in the Oregon Tekagami may mean that the pieces in the earlier group were initially in an album of their own, which was later dismantled and repasted into the present format together with the newer fragments. Unfortunately, we do not have any records on this tekagami, so for now the details of its production process has to remain a mystery. Regardless, generally speaking the practice not only of pasting but repasting was quite common in the Edo-period kohitsugire collecting.

In the Oregon Tekagami, pages 20-21 of the frontside is an ideal case study to think further about the effect of repasting. The two-page spread presently holds six fragments, three from copied sutras, and another three from poetry collections. 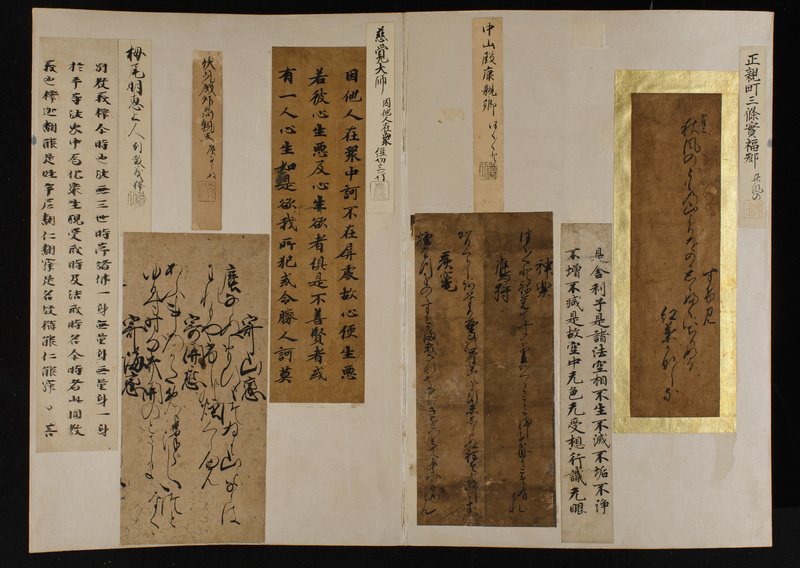 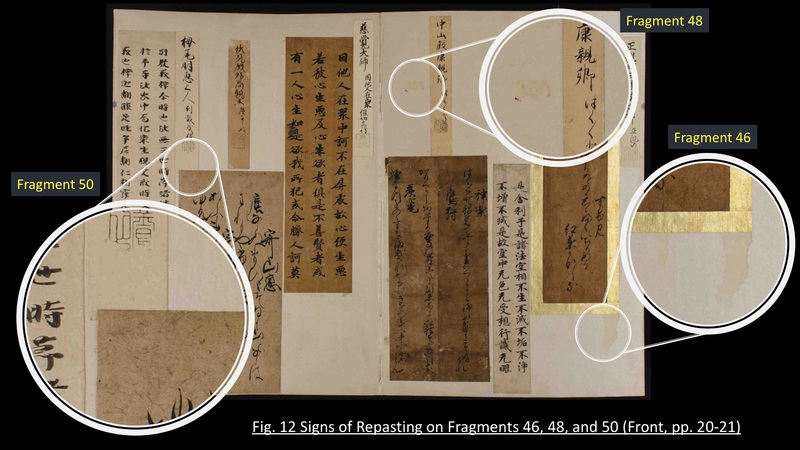 At the bottom right corner of Fragment 46, we can observe a large triangular tear on the album paper. Fragment 46 is adorned with a disproportionally thick golden border, which could have been an effort to conceal at least part of the unseemly damage caused by the repasting.

The small rectangular tear is visible to the left of the kiwamefuda for Fragment 48. This type of small glue mark commonly appears under kiwamefuda. So, for this fragment, it is probable that the earlier piece that was peeled off from this location was smaller and had the accompanying slip pasted to its top left side, somewhat lower than where the present slip for Fragment 48 is positioned.

Finally, the top left corner of Fragment 50 slightly covers over the bottom of the kiwamefuda for the Fragment 51 immediately to its left. Customarily, following the right to left movement of Japanese writing, it appears the fragments were generally pasted into a tekagami album from right to left. Furthermore, because the overall balance of the pieces on a two-page-spread page was an important aesthetic concern for a tekagami, the location of fragments would have been determined prior to putting any adhesives. Thus, the only way in which this type of overlap we see between Fragments 50 and 51 could have occurred is if Fragment 50 was repasted after Fragment 51.

There are other smaller signs of repasting across pages 20-21, including around Fragment 49. The only fragments on these pages that seem to retain their original positions are the sutra fragment with the missing kiwamefuda at the middle of the right hand page (Fragment 47) and the three-line fragment of another sutra attributed to Monk Myōe 明恵 (1173-1232; Fragment 51) at the farthest left side.

We do not know when the repasting happened or by whom. What we do know is that the surface of a tekagami album was often treated with mica to facilitate the ease of not just pasting, but also removing a fragment, attesting to the fact that some sort of switch-around was assumed to happen at some point in the life of a tekagami album.

This type of repasting happened for multiple reasons. Similar to, for instance, collecting baseball cards, it was common for collectors of kohitsugire to trade pieces with other kohitsu aficionados. A person might switch up the fragments if one found a piece of higher quality. Or one might remove a quality fragment, so that it can be remounted as a hanging scroll. Being a precious commodity, a kohitsugire could have also been removed from a tekagami album and sold in time of need. Pages 20-21 of the Oregon Tekagami may have been replaced for any of these reasons.

Interestingly, in time of repasting, it did not seem to have mattered too much whether or not a new fragment pasted in the old one’s stead disturbed the basic principle of tekagami arrangement. The kiwamefuda on the present pages 20-21 of the Oregon Tekagami include names of an imperial prince, courtiers, and eminent monks, not at all adhering to the organization principle based on social groupings. However, this does not necessarily mean that the idea of retaining some sort of order was completely neglected. When we step back and look across the entire two-page spread, we can detect an effort to create visual intrigue and thematic cohesion.

Observe, for instance, how the page is laid out so that poetry and sutra fragments are pasted alternately. Once we read the poems included in Fragments 46, 48, and 50, we realize that they are either melancholic songs of autumn or otherwise evoke motifs such as smoke or dust, associated with frailty of life. This way, arguably the new ensemble on pages 20-21 collectively reminds viewers/readers of the Buddhist teaching of impermanence.