In addition to the writing system itself, people on the Japanese archipelago embraced a strong admiration for calligraphy as the most sophisticated form of artistic expression held in China and the broader East Asian cultural sphere. Writing in East Asia is done using a brush with the tip made of a variety of animal hair or fur (most popularly of horses). A brush is dipped in ink, a color or metallic pigment, such as gold or silver. The flimsiness of the tip of the brush demands great concentration, as well as restraint and control of one’s bodily movement, to manipulate, but once one masters the skill, it grants the calligrapher incredible freedom and expressive potential (Movement of the brush in kana calligraphy, see video below).

For this reason, calligraphy came to be revered in East Asia—including Japan—as the artform that can reveal not just one’s artistry but the very essence of one’s inner qualities and intellect. The phonetic nature of kana characters encouraged development of a fluid or dynamic style of cursive writing very much distinct from Chinese calligraphy. During the Heian period (794-1192), kana calligraphy fully blossomed into a highly appreciated form of art in its own right, where noble men and women of the court and eminent monks particularly renowned for their calligraphic prowess came to be revered as calligraphy sages.

This reverence for accomplished calligraphy, or the “hand” (te 手 in “tekagami”), that began among the wealthiest and most literate stratum of society—courtiers and religious clerics—not only continued through time, but eventually spread further to other social groups as their political presence grew. During the medieval times (beginning in the Kamakura period; 1192-1333) when the warrior class became the de facto leaders of the nation, the shogun and warrior lords displayed equally fervent pursuit of the practice of calligraphy as the members of the imperial court. When the wealthy and increasingly literate townspeople of the rapidly growing metropolises rose as the cultural trendsetters in the Azuchi/Momoyama (1568-1615) and Edo (1615-1868) periods, the passion for poetry and calligraphy was once again embraced.

Considering the centrality of calligraphy as a form of artistic expression, it is not surprising that people began to collect and display the accomplished hands of the past masters. The practice of collecting calligraphy began almost immediately after writing became standard training within the imperial court in the Nara period (710-794). For instance, in the latter half of the eighth century, among the objects offered to the Great Buddha of Tōdaiji (Nara prefecture) to commemorate the death of Emperor Shōmu (701-756; r. 724-749) were scrolls of calligraphy by the prominent Chinese masters, including the fourth-century calligraphy sage Wang Xizhi (ca. 303-361).

Chapter 32 (“The Plum Branch” or “Umegae”) of the early eleventh-century epic novel Genji monogatari (The Tale of Genji) by Lady Murasaki includes an episode where the protagonist compiles a set of calligraphy models in preparation for his daughter’s entrance into the imperial court by choosing the best pieces from his own collection and asking other members of the court famed for their hands to produce a sample.1 In this early stage, however, these calligraphy samples seem to have been stored in the form of loose leaves in a box or as codices or handscrolls if they were copies of poetry anthologies, narrative stories, or Buddhist scriptures.

The practice of fragmenting calligraphy for collecting or exhibiting purposes became common in the sixteenth century with the popularization of the “rustic” (wabi) tea ceremony. The custom of drinking green tea, which was introduced from China, was elevated to a highly formalized aesthetic and communal practice in the sixteenth century and spread across social groups. During a tea ceremony, the tearoom was prepared with tasteful decoration that reflected the theme of the gathering. An example of accomplished calligraphy mounted as a hanging scroll or tekagami album was considered to be an appropriate ornamentation (for an example of sutra fragment mounted as a hanging scroll, see this example in the Portland Art Museum).

Early documented evidence of this practice can be found in an eleventh-century handwritten copy of an eighth-century poetry anthology called Man’yōshū (Collection of Ten Thousand Leaves; presently in the collection of the Imperial Household Agency). According to the box inscription, in the sixteenth century a warrior lord, Toyotomi Hidetsugu (1568-1595), demanded the beginning and end portions of the handscroll to be cut, so that he could paste them into his tekagami album.

The comparison below shows the change in one’s engagement with calligraphy due to the difference in the format of mounting. The two examples are both tanzaku oblong poetry slips but the ones in tekagami are mounted on an album, as opposed to the one by Ōtagaki Rengetsu, which is mounted as a hanging scroll. Due to its shape, tanzaku only has room for one poem. However, when it is mounted in a tekagami, the poem and calligraphy can interact with other pieces pasted on the same page. On the other hand, when it is in a hanging scroll, the mounting works like a spotlight, allowing viewers to appreciate the details of the calligraphy more intimately for its form, as well as its engagement with the content of the poem and the paper decoration. 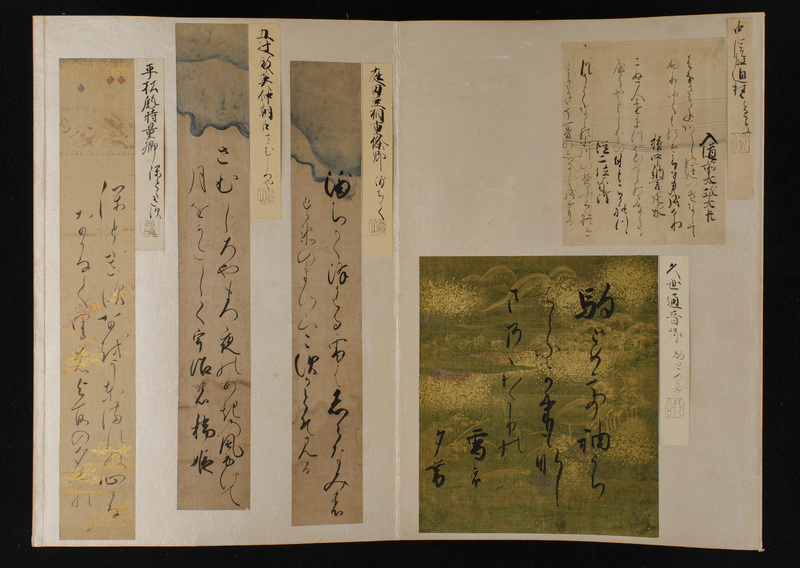