If the point of kiwame was not the historical accuracy of its identification, then could there have been any “fakes”? The short answer is, yes!

What constitutes “fraudulence” in kohitsu collecting is an interesting question. As was mentioned earlier, calligraphy fragments in the Edo period were commodities, in some cases of extreme value (see “What Is a Tekagami?”). Naturally, there are known examples of not only fraudulent kohitsu fragments but also fraudulent kiwamefuda. However, due to the method of identification (introduced above), we must carefully distinguish actual cases of forgeries from incorrect but sincere attributions. In the Oregon Tekagami, an interesting case study is Fragment 20. 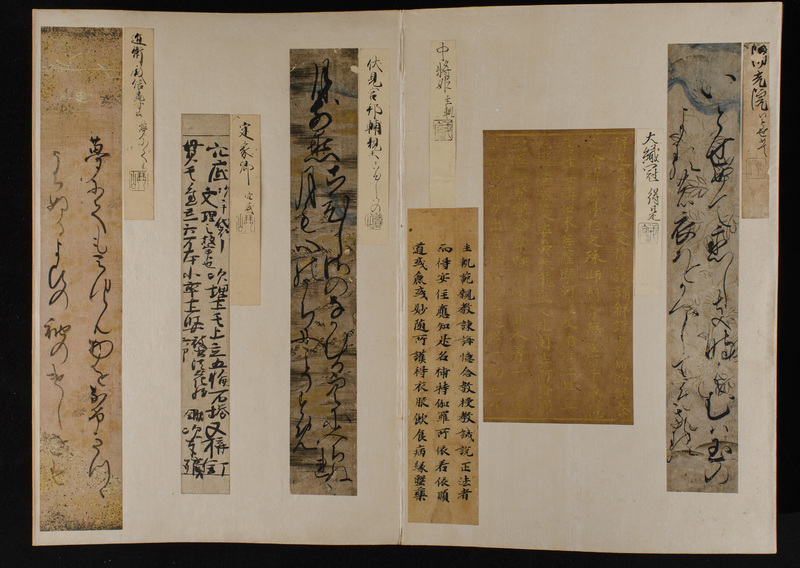 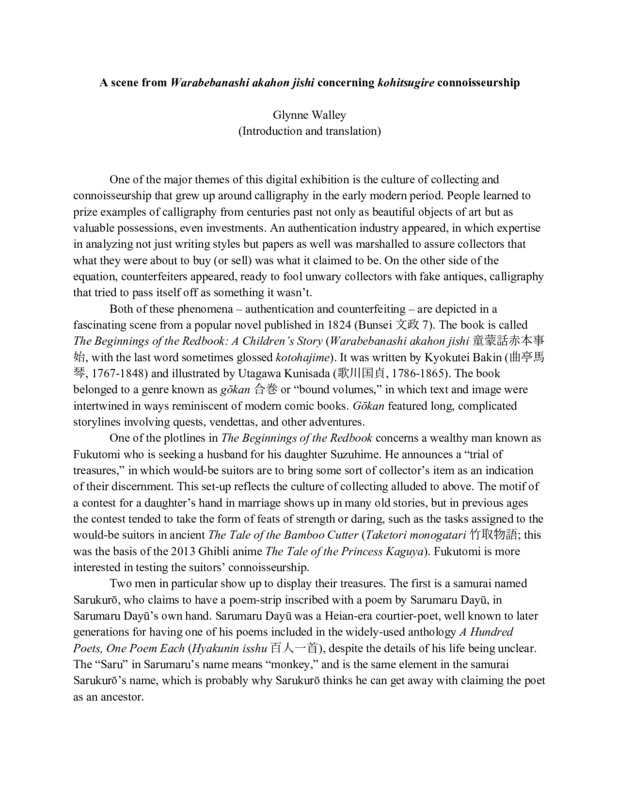 According to the accompanying kiwamefuda the piece is attributed to Fujiwara no Teika 藤原定家 (1162-1241), a renowned early Kamakura-period courtier who established his own lineage of calligraphy. Examples of his hand were among the most highly sought after in kohitsu collecting. The content of Fragment 20 makes clear that it did not come from a poetry anthology but was a section of a diary. However, no equivalent passage appears in Teika’s own diary, Meigetsuki 明月記 (The Record of the Clear Moon). In fact, the passage is not from Teika’s diary at all, but from a diary of another courtier, Taira no Nobunori 平信範 (1112-1187), called Heihanki 兵範記 (or Hyōhanki). If there is evidence that the appraiser knowingly provided the incorrect identification, then this could be an example of fraud.

However, based on the seal and the style of calligraphy, the appraiser who produced the accompanying kiwamefuda was most likely the sixth head of the main lineage of the Kohitsu family, Ryōon 了音 (1674-1725), who was serving as the Officer of Kohitsumi for the Tokugawa government. His pedigree and prestige give us pause to read any malintent. Furthermore, purely based on a formal analysis, the calligraphy on Fragment 20 exhibits characteristics of the standard Teika-style. A scroll in the collection of the Tenri Central Library (Nara prefecture) and fragments elsewhere verify that Fujiwara no Teika personally copied Heihanki, possibly as a reference for putting together his own diary. For this reason, it is safe to say that there was a strong reason to attribute this piece to Fujiwara no Teika. So far, so good.

One detail that warrants further research is the paper. The ruled line at the top of Fragment 20 appears different from other known examples of Teika’s copy of the Heihanki, which may be a result of cropping, evidence that it is a copy made by someone else in the style of Teika, or something more illicit. In recent years, the use of Carbon 14 (14C) testing on kohitsu paper has revealed many fragments of Teika-style calligraphy that were attributed to Teika in the accompanying kiwamefuda but in actuality were made using Edo-period paper. Today such pieces are considered to be “forgeries.”

Given the popularity of Teika-style calligraphy even in the Edo period, one must always entertain the possibility that even if a Teika-style work of calligraphy appears on an Edo-period paper, the person who initially produced it did not have any malintent: the work could have just been calligraphy practice. However, the first step of kiwame is identifying the period in which the calligraphy was produced through the examination of the support (in most cases, paper). This means in the kohitsu dealing, if whoever was responsible for cropping Fragment 20 knew that the original was simply a contemporaneous copy, then the fragment would have been treated as a “fake” kohitsu even during the Edo period.

Another common fraud in kohitsu business was forging of kiwamefuda. The details of kohitsu dealing during the Edo period are still very much understudied. One thing we do know is that having a fragment appraised added a significant expense. Given the centrality of the calligrapher in the appreciation and pricing of a fragment, however, commissioning a kiwame was a necessity. It is no surprise, therefore, that there are examples of kiwamefuda manipulated and repurposed for another fragment, or worse, fully forged with imitated handwriting and faked seal.

In the Oregon Tekagami, the calligraphy fragments and kiwamefuda both by and large seem to be honest pieces. However, among the fragments that show signs of repasting, the kiwamefuda accompanying Fragment 254 only lists the name of the calligrapher without the opening characters from the content or any appraiser’s seal (Fig. 5, see below). Peeling a fragment off and replacing it with another was a common practice in tekagami assembling. On the other hand, not including the appraiser’s seal or the first characters of the content on a kiwamefuda is unorthodox, thus calls for further careful analysis.

From today’s perspective, however, even a piece that may be fraudulent provides additional intrigue to the history of a tekagami album and a possible clue as to the identity of the individual who compiled it. 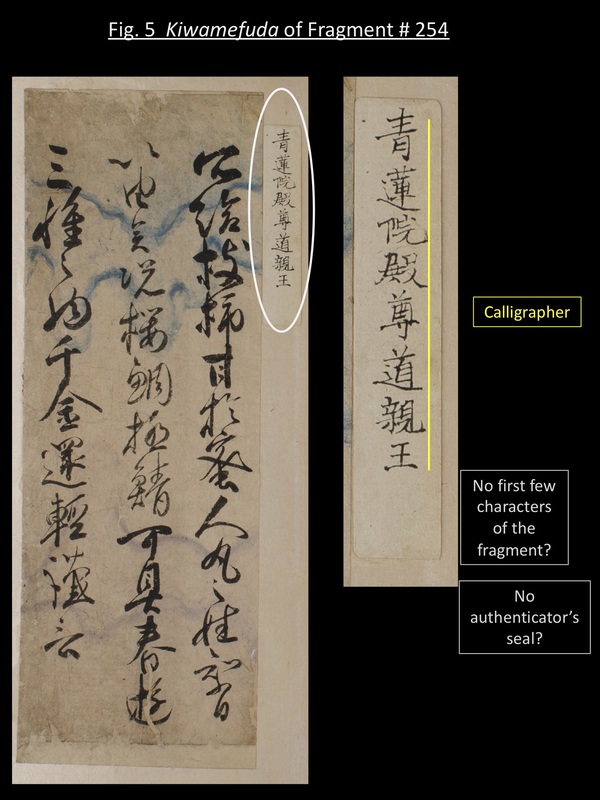 3. In the case of the 1,000-ryō poetry card attributed to Fujiwara no Teika (mentioned in footnote 1 above), the buyer and vendor each paid 10% of the sales price to the appraiser.