In tekagami assemblage, the most important information on a kiwamefuda is the name of the calligrapher, which appears at the top of the slip in large characters. In order to make clear for which fragment the slip was written, the appraiser typically also jotted down the first few characters of the piece of calligraphy immediately below the calligrapher’s name. The seal at the bottom of the front side is the family seal of the lineage to which the appraiser belonged.

For instance, all members of the main lineage of the Kohitsu family in Kyoto shared the seal Kinzan 琴山 (literally, “zither mountain”), while members of the Edo-branch of the Kohitsu family used the seal Shuson 守村, after the given name of the founder. Further details such as the date of kiwame, name, and individual seal of the appraiser were added to the back of the slip (see also “Establishment of the Standard Tekagami Format”).

To translate the word kiwame, this exhibition has been using two terms “identification” and “authentication,” which in English are not synonyms. Kiwame is not exactly the same as what one might consider “appraisal” today. The above discussion has already established that the central purpose of kiwame was to assign a calligrapher to every kohitsu one collected and subsequently pasted into a tekagami album. Presence of a convention in a kohitsu arrangement meant that certain “hands” were more coveted than others, such as Shōmu and Kōmyō. A challenge was that many of these popular calligraphers lived so long ago that even during the Edo period, not enough examples of their works remained.

For instance, no fragment attributed to either Shōmu or Kōmyō in any of the known tekagami, including the Oregon one, matches in style with the only surviving calligraphy works that are definitively by the hands of the royal couple in the collection of the Shōsō-in Repository 正倉院 (Nara prefecture). So, from today’s perspective, if we were to consider the kiwamefuda for these pieces as “authentication” slips, then one might be tempted to consider the fragments fraudulent.

This, however, would be a mistake.

Instead, the seeming inaccuracy in the “identification” given on a kiwamefuda should be understood as more a result of the difference in the very definition of “appraisal” in the Edo period. At this time, the common process of kiwame was driven by typology. An appraiser would first estimate the time period of the production of a fragment through a close examination of the paper, followed by pinpointing the specific school of calligraphy based on its style. From there, one proceeded to assign a specific name of a calligrapher according to the quality of the calligraphy. What this means is the calligrapher who was identified through this method of appraisal was in essence more the embodiment of a particular style and quality of calligrapher, rather than the actual writer of the work.

Does this mean the information provided by kiwamefuda is never useful for today’s research? Not necessarily. Kohitsumi often began their training as children and each lineage most likely had its own tekagami of samples that was used as the foundation for their identification.1 Kohitsumi’s assessment of the time period of production and style of a calligraphy fragment is remarkably accurate, or at least consistent, particularly for pieces made in the Muromachi period (1333-1573) or after. Scholars today often use the information on kiwamefuda as an aid to estimate the period when a work of calligraphy was produced and to search for other fragments sharing the same original source.

In short, from today’s perspective, the primary role of a kiwame was “identification” more than “authentication.” Yet, the issue is a little more complicated than that, for there are instances when a kiwamefuda also served to “authenticate” a piece. For example, Fragment 69 in the Oregon Tekagami is accompanied by two kiwamefuda by kohitsumi from two different lineages, Kawakatsu Sōkyū 川勝宗久 and Asakura Monyū I (Fig. 4; also see below). The two kiwamefuda attribute the piece to the same sixteenth-century eminent monk named Ikkyū Sōjun 一休宗純 (1394-1481). In this case, the function of the second slip is not necessarily to identify the fragment, but to authenticate the identification provided by the first slip. 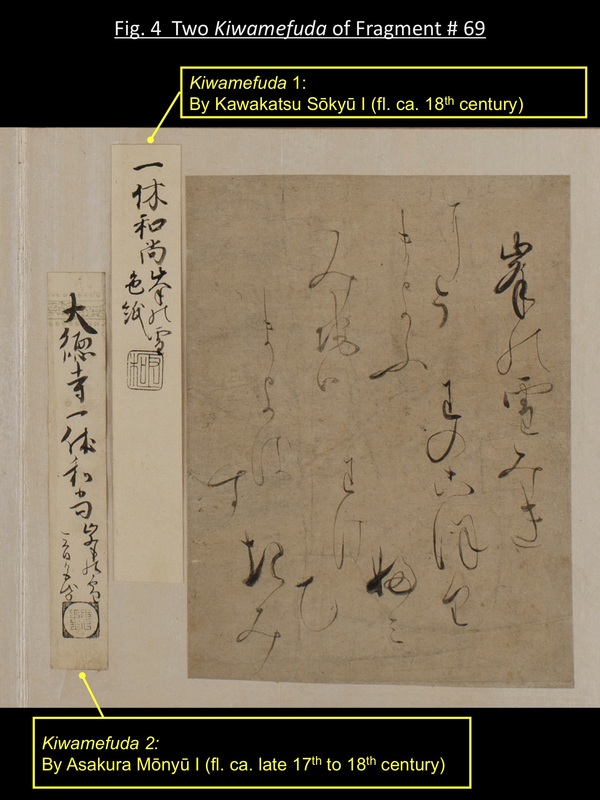 Finally, there is also the complex issue of how collectors perceived kiwamefuda. If Edo-period collectors imagined tekagami as an ensemble of “friends from unseen past,” then it is plausible that they trusted the identification of calligraphers in kiwamefuda and imagined the writing to genuinely be by whoever was named on the slip. As we saw with the fragment from the Oregon Tekagami attributed to Ikkyū Sōjun (Fragment 69), when in doubt, a collector had the option to authenticate the identification by commissioning an additional appraisal. However, from today’s definition of “authenticity,” Fragment 69 is definitively not the genuine hand of the eminent monk.

Are we to understand that the owner of the Oregon Tekagami was duped?

Again, not necessarily. Interestingly, the style of calligraphy on this fragment is not dissimilar to the sample of Ikkyū Sōjun’s hand included in Otekagami 御手鑑  published in 1651 (see the calligraphy to the left on the right-hand page; for more on Otekagami see “Establishment of the Standard Tekagami Format”).

The two calligraphy samples share resemblance in the generous spacing of characters and fast movement of the brush, broken occasionally by the bold and dark lines of kanji characters that work effectively as an accent. In an age without Internet and digital image archives that we might take for granted today, an Edo-period collector had to be a high-ranking and powerful warrior lord or courtier, or perhaps among the wealthiest merchants, to possess independent means of verifying the information provided on a kiwamefuda.

For understanding the place of Fragment 69 in the kohitsu collecting practice of the Edo period, therefore, whether or not this calligraphy was actually by Ikkyū is not as important as the fact that its style perfectly matches the shared understanding of Ikkyū’s hand that was already established and reinforced by the very professional appraisers doing the appraising. To put it differently, the dual aspect of “identification” and “authentication” inherent in kiwamefuda meant that the act of appraisal itself defined what the “hand” should look like for any given calligrapher (in this case Ikkyū) and by extension what the collective imagination of this individual’s inner qualities had to be. 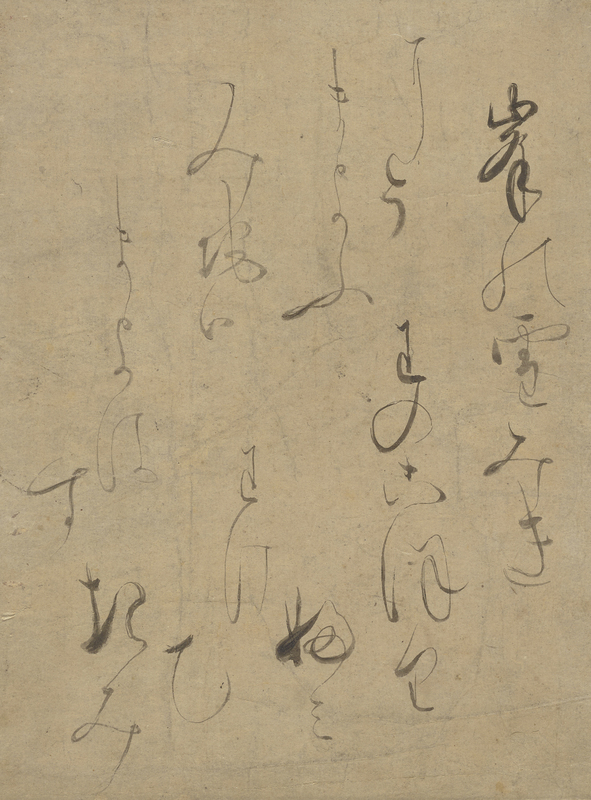 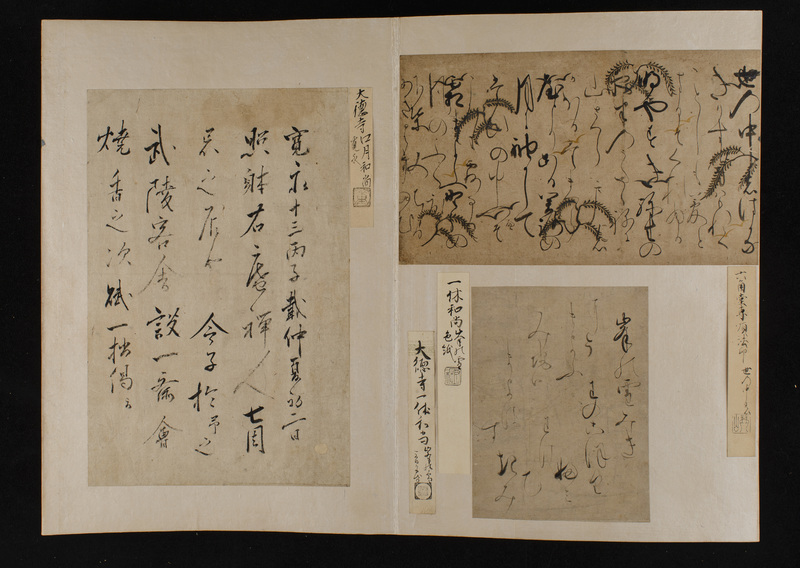 1. There are four tekagami in Japan that are designated as “national treasures.” Among them, the one presently in the collection of the Kyoto National Museum called Moshiogusa 藻塩草  formerly belonged to the main lineage of the Kohitsu family in Kyoto, while the one at the MOA Museum of Art known as Kanboku-jō 翰墨城  was originally passed down through the Edo branch of the Kohitsu lineage. ↩