Tekagami and the Beginning of Writing in Japan

Although language must have existed on the Japanese archipelago ever since the first human migration in the Neolithic period, people in Japan did not have a writing system of their own until it was introduced from the Chinese continent. Chinese characters were first brought to the Japanese archipelago by the visitors and migrants from the Chinese continent and Korean peninsula sometime around the third century CE. However, at this time “writing” was primarily inscriptions on imported goods (for instance, mirrors and coins) and is thought to have been treated more like a talisman than necessarily material for reading.

The Chinese writing system took root among the upper echelon of the Japanese society in the seventh century. The rich archival and archaeological evidence of writing on paper and wood attest that by the eighth century, literacy was common at least among those who served the imperial court. Because people in Japan imported the entire writing system of China, at this early stage, “to be able to write” essentially meant to be able to write in Chinese. However, the domestic language of Japan naturally had different sounds and syntax from Chinese. For this reason, two sets of phonetic alphabets (called kana 仮名) that used Chinese characters as the basis for their forms were invented in the eighth century. By the twelfth century, these kana alphabets were by and large established as the ones we see today.

The ability and freedom to phonetically represent Japanese sounds in kana was the prerequisite to the flourishing of Japanese-style poetry composition and narrative storytelling in writing. Even after the establishment of Japanese alphabets, for much of the intellectual history of Japan, formal writing (called mana 真名 or “true characters”) continued to be Chinese-style writing. Chinese characters also became fully integrated into Japanese writing, assigned with Japanese pronunciations and even new meanings. Even today, the Japanese writing system exists in a distinct hybrid form that interweaves characters that retain the general logograph of the original Chinese language and Japanese kana alphabets.

This complex writing system in Japan provided certain freedom and rich expressive potential for a calligrapher. For example, in calligraphy, whether or not to represent a word using Chinese characters (kanji 漢字) or kana alphabets often is an aesthetic choice based sometimes on the content, but more on the balance of characters on a page or mood the calligrapher chooses to express.

Compare the two fragments below (109 and 110) to examine the difference in the overall mood and flow of the brush between a kana calligraphy (109) and Chinese-style counterpart (110). Both examples include one poem on a shikishi 色紙 poetry card decorated using sprinkled gold and other pigments, with an additional underdrawing of flora in a misty landscape. The similarity in paper decoration indicates that the two works were originally part of the same set of shikishi that were either pasted in an album of their own or on a pair of folding screens.

The fact that the two poems derive from the same poetry anthology, Wakan rōeishū 和漢朗詠集 (A Collection of Japanese and Chinese Poems for Recitation), supports this observation (for an example of a folding screen with shikishi with poems from this anthology, see this example in the collection of the Metropolitan Museum of Art). Comparing the two fragments, one may find that the Japanese poem done in kana calligraphy (109) appears overall more vertical and exhibits a greater variation in thickness and speed of brushstrokes. This sense of fluidity that comes from the variation in movement in line characterizes kana calligraphy. 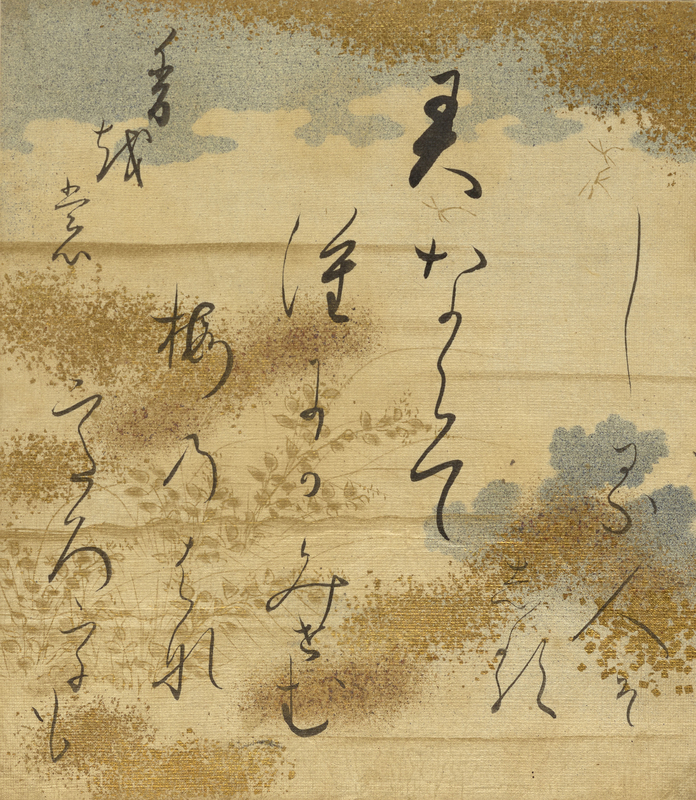 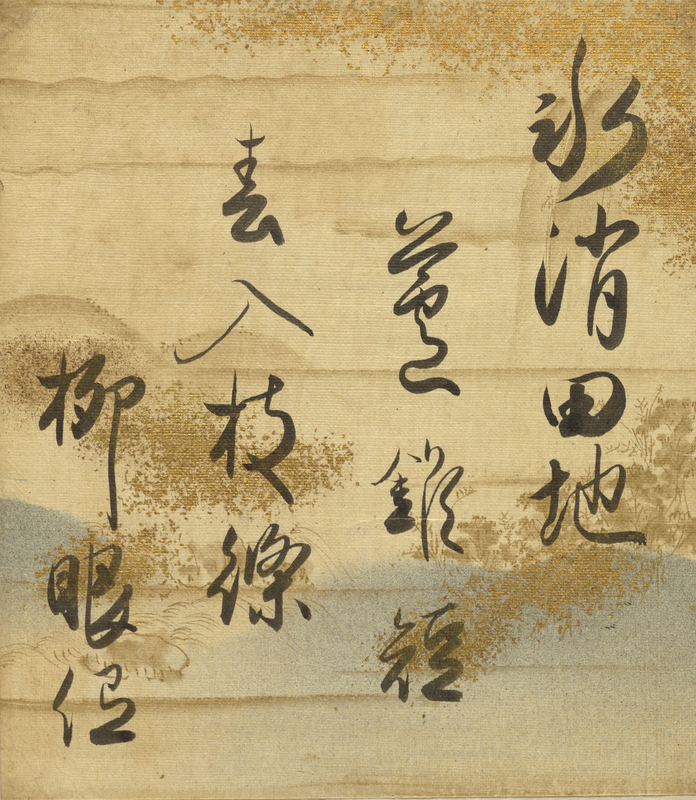