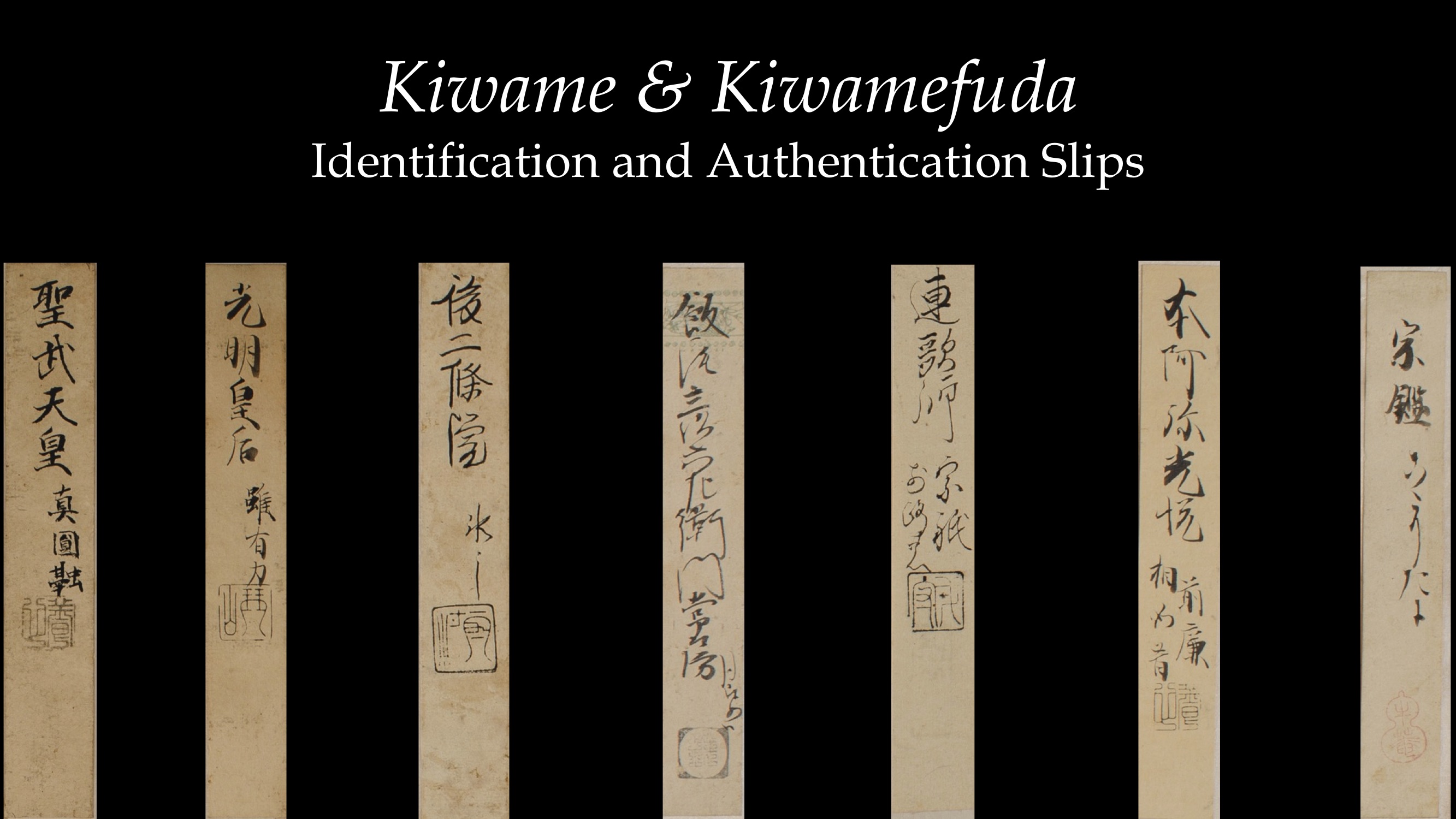 “Establishment of the Standard Tekagami Format” already explained the general principle of pasting kohitsu calligraphy into a tekagami album that relied on the professional appraisers, called kohitsumi 古筆見 or kohitsu mekiki 古筆目利 (the “appraiser” of antique writing), to assign a calligrapher for each of the fragments. One of the most popularly known and consistently followed principles was to open a tekagami album with sutra fragments attributed to Emperor Shōmu 聖武 (701-756; r. 724-749) and his consort Kōmyō 光明 (701-760).1 The Oregon Tekagami also adheres to this convention (see images below). The remaining pieces in an album were generally grouped according to the social status of the calligraphers. 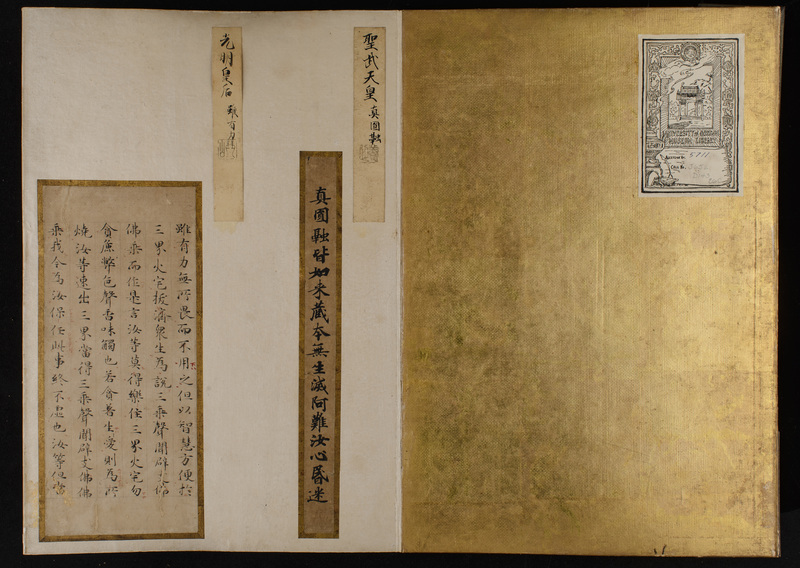 This organizational principle derived in part from the widely shared perception in East Asia regarding the close relationship between a work of calligraphy and its calligrapher: a person’s handwriting betrayed the essence of their inner quality. For this reason, the identification of the calligrapher was a prerequisite for the full and proper appreciation of a kohitsu fragment and by extension, a tekagami album.

In order for this arrangement to be possible, a calligrapher had to be assigned to every calligraphy fragment collected. Beginning in the seventeenth century, the members of the Kohitsu family served as the most prestigious lineage of calligraphy appraisers. In time, sons and students of the Kohitsu family also branched off to establish their own lineages. Calligraphy appraisers were in high demand during the Edo period when kohitsu collecting was at its height. A woodblock-printed information sheet with names and seals of prominent kohitsumi was first published in 1788 and continued to be updated and reissued until the end of the Edo period (For an image of the sheet published in 1788, see page 2 of Kohitsu o tanoshimu 古筆を楽しむ, the catalogue for a 2011 spring exhibition at the Nagoya University Library).

Even after the fall of the Tokugawa regime (that ruled the Edo period), calligraphy appraising existed as an occupation until the early twentieth century. Today, we find kiwamefuda 極札 (identification or authentication slips) bearing the seal of an unidentified authenticator, indicating that there were far more professional appraisers active during the Edo period beyond the main lineages. For example, in the Oregon Tekagami, fragment 46 is accompanied by a red seal of an unidentified appraiser (Fig. 2, see below). 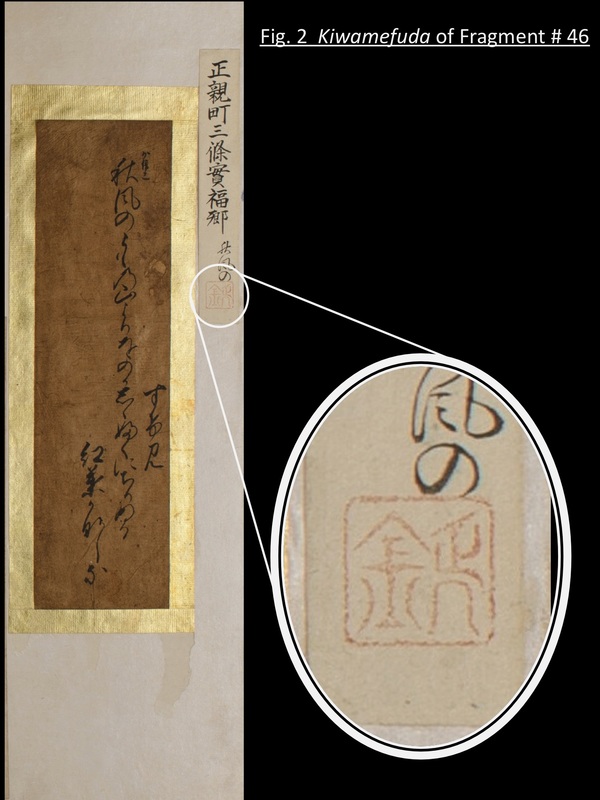 Once a work of calligraphy was appraised, the certificate of identification came in different formats—from a box inscription, verification at the end of a codex or handscroll, to a single-sheet paper with its own wrapper, and small oblong slips known as kiwamefuda (identification or authentication slips). By far the most common was kiwamefuda. Kiwamefuda is a small oblong paper of about 10-15 cm in length. On the Oregon Tekagami, 317 of the 319 pieces are accompanied by kiwamefuda either at the top, or to the right or left of the calligraphy fragment. The two pieces without a kiwamefuda show evidence that there was one originally glued directly above the fragment at the top and bottom of the slip that later was peeled off (Fig. 3, see below). 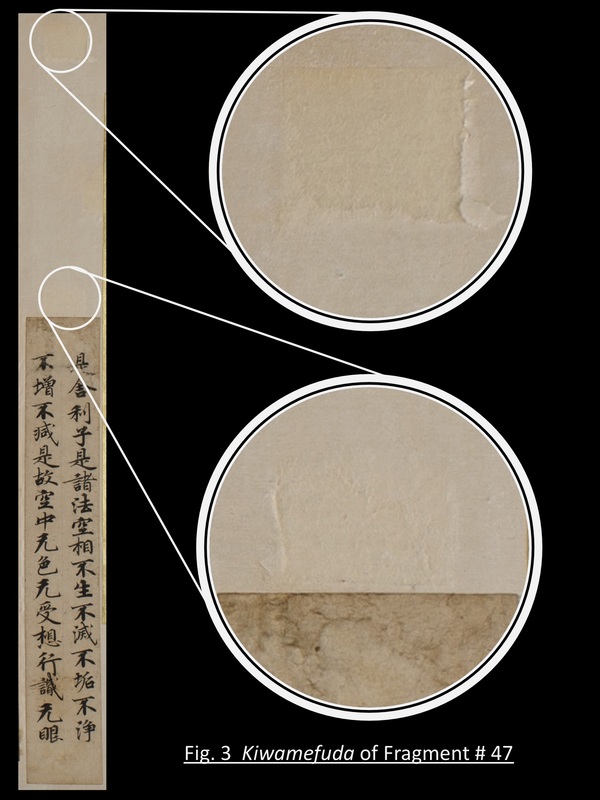 Most commonly, a kiwamefuda is simply an undecorated white or creamy-colored paper. But as we can see from the examples on the Oregon Tekagami, sometimes the owner of the fragment commissioned the kiwamefuda to be written on a more elaborately decorated paper. See for instance the slip for Fragments 86, 125, 134, and 135, which come with a greenish stamped pattern across the top (below). These four slips all happen to bear the identification written by Asakura Monyū I and his successor, Monyū II (朝倉茂入; both fl. latter half of the seventeenth century). It is plausible that these pieces were originally owned by the same individual (for more on the history of the Oregon Tekagami, see “The Oregon Tekagami: A Closer Look”). 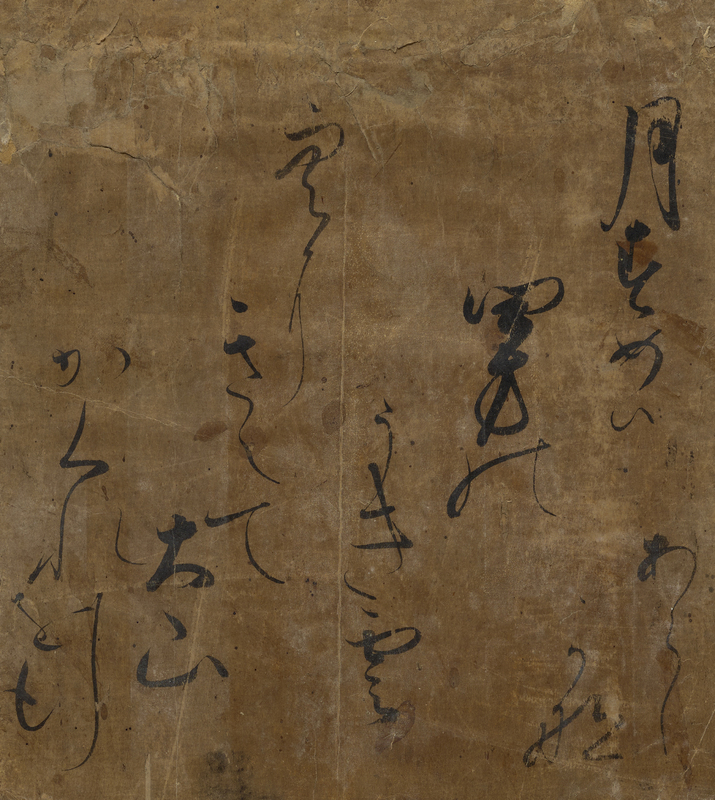 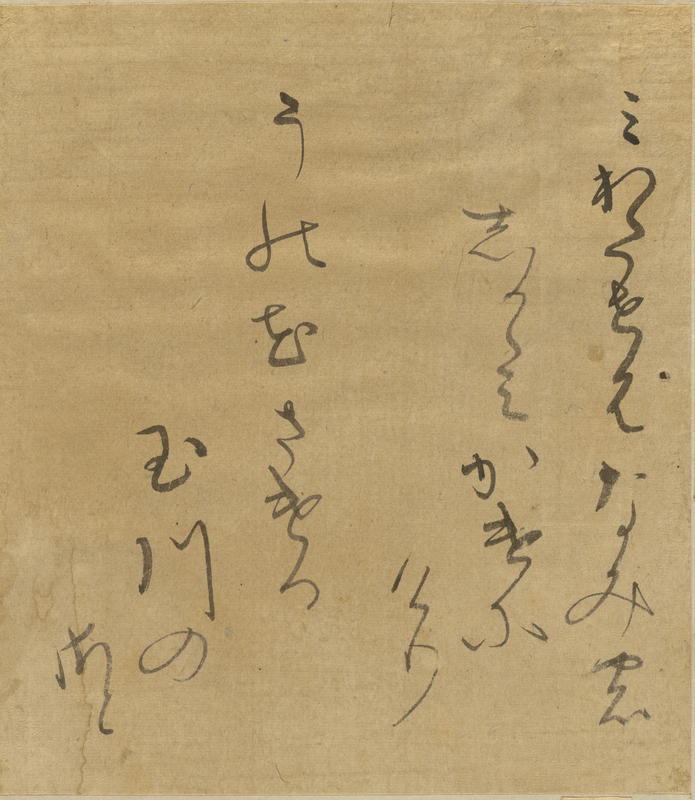 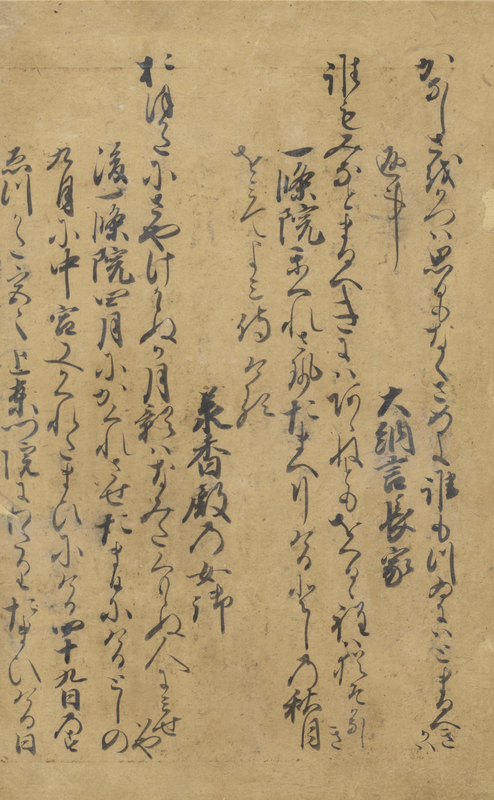 1. The reason behind this convention is a mystery. Some scholars hypothesize that it may have related to the fact that tekagami albums were often prepared as a trousseau among warrior and aristocratic families. Others think it may have derived more generally from the respect Shōmu and Kōmyō garnered as accomplished calligraphers.