Presently there are no records of when or how the pieces entered the museum’s collection. However, due to the distinct calligraphic style of the identification slips, we know that the thirty-six fragments were sold through an antique shop in Kyoto called Geirinsō 藝林荘  (Fig. 22, see image below). Opened in 1946, immediately following the conclusion of the Pacific War, Geirinsō is still in operation in one of the oldest antiques districts in Kyoto called Teramachi-dōri.1 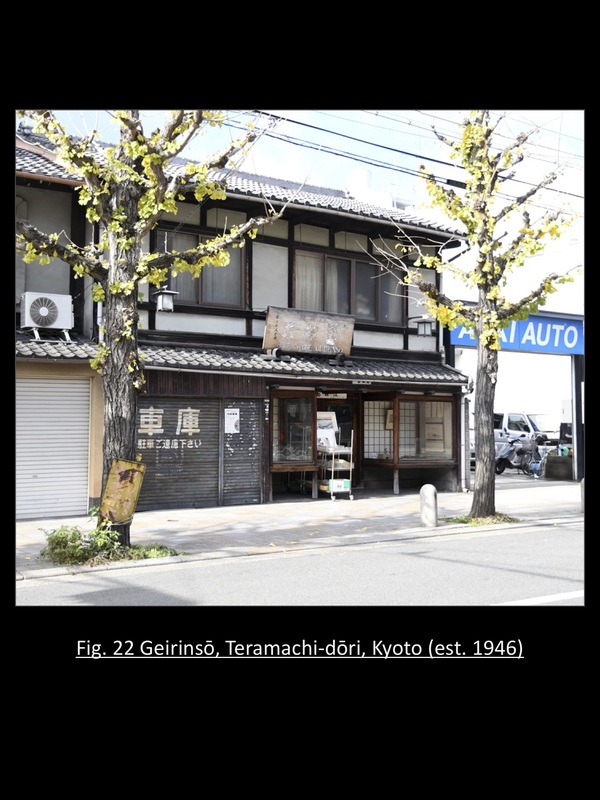 One of the pieces (X2010:1.15) comes with gold lining along the top and bottom of the fragment (Fig. 23, see image below). This may indicate that this piece was removed from a calligraphy album (tekagami), not dissimilar to the one in the Oregon Tekagami, for resale—another common practice in the antiques market of the period. However, the initial owner, Makado Takao—who was a collector himself—was deeply knowledgeable about Japanese and East Asian calligraphy and personally procured a large collection of premodern scrolls and codices. The majority of Geirinsō’s inventory of kohitsugire were the fragments Makado Takao himself cut from his own collection for sale.

From today’s perspective, this practice of cutting may appear surprising, even scandalous. But it is important to understand it in the context of the over three-centuries-old convention in Japan of appreciating calligraphy in fragments (for more information on collecting fragmented calligraphy, see “History of Calligraphy Appreciation”). Sometime after Takao’s son took over the business in the 1990s, Geirinsō switched to using photocopies of Takao’s slips. Since all of the slips on the JSMA fragments are handwritten, it is possible to narrow down the initial purchase to sometime prior to this shift. 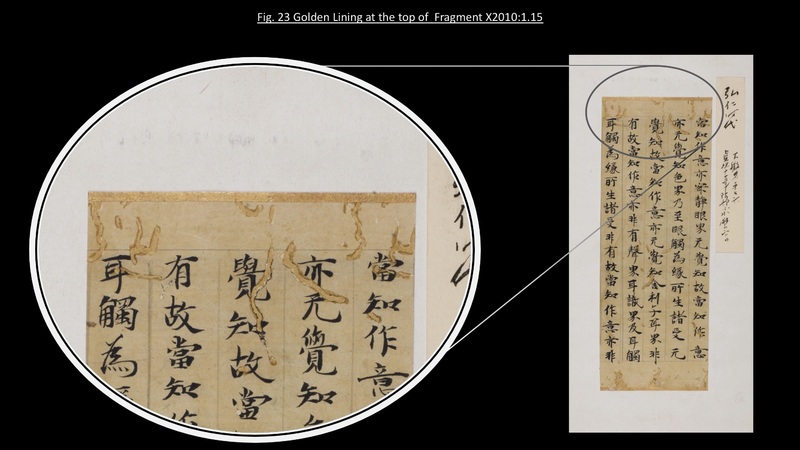 The fact that Makado Takao owned works in the original binding also meant that he had access to the postscripts that often came with scrolls and codices. He used that information to provide information about his kohitsugire. This is another fundamental difference between Geirinsō’s slips and the Edo-period kiwamefuda we find in works such as the Oregon Tekagami. The Geirinsō slips do not provide the names of calligraphers unless they could be confirmed through documental means. In addition, the majority of Geirinsō’s slips also include some information of production date or at least the general period, which was information only given indirectly as a byproduct of identifying the calligrapher in earlier kiwamefuda. In short, Geirinsō’s slips are based on the modern standard of connoisseurship. For this reason, in present scholarly context, information on the Geirinsō slips is considered to be generally reliable.

1. For a brief introduction to the antiques district along the Teramachi-dōri, see Chris Rowthorn, “Kyoto Art and Antiques,” Inside Kyoto, https://www.insidekyoto.com/kyoto-art-and-antiques. ↩